The Japanese Ministry of Defense's (MoD's) Joint Staff Office announced on 25 August that fighters scrambled by the Japan Air Self-Defense Force (JASDF) have intercepted a new type of Chinese medium-altitude long-endurance unmanned aerial vehicle (MALE UAV) that skirted Japanese airspace, flying over the East China Sea in the direction of the Nansei/Ryukyu Island chain the day before.

The JASDF has also visually identified the UAV as the TB001, although it did not provide further details other than the observed flightpath of the air vehicle, which saw it approach Okinawa and Miyako Island, before turning back to Chinese airspace in the vicinity of disputed Senkaku/Diaoyu Islands. 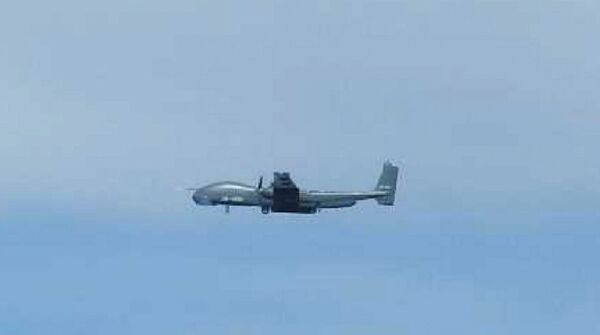 On the same day, the JASDF also intercepted a separate flight of other Chinese military aircraft comprising an in-service BZK-005 reconnaissance UAV and two Shaanxi Y-9 surveillance aircraft – with one configured for maritime patrol and the other for signals intelligence operations – which overflew the Miyako Strait between Miyako Island and Okinawa into the Pacific Ocean before returning to China.

Based on JASDF imagery, Janes can confirm that the BZK-005 UAV is an upgraded variant that is specifically configured for wide-area intelligence, surveillance, and reconnaissance (ISR) missions with an undernose synthetic aperture radar (SAR) radome – possibly housing a Ku-band D3010 SAR system with a dual-mode SAR/ground moving target indicator (GMTI) capability – and a mid-mounted ventral electro-optical/infrared (EO/IR) turret.