The Chinese Academy of Sciences (CAS) has deployed its new Haidou-1 deepwater-capable autonomous underwater vehicle (AUV) during an expedition to the Western Pacific Ocean, it announced on 9 June.

The 3.8-m long Haidou-1 AUV is a joint development by CAS subsidiary Shenyang Institute of Automation (SIA), Harbin Engineering University, and the CAS-affiliated Xi’an Institute of Optics and Precision Mechanics. 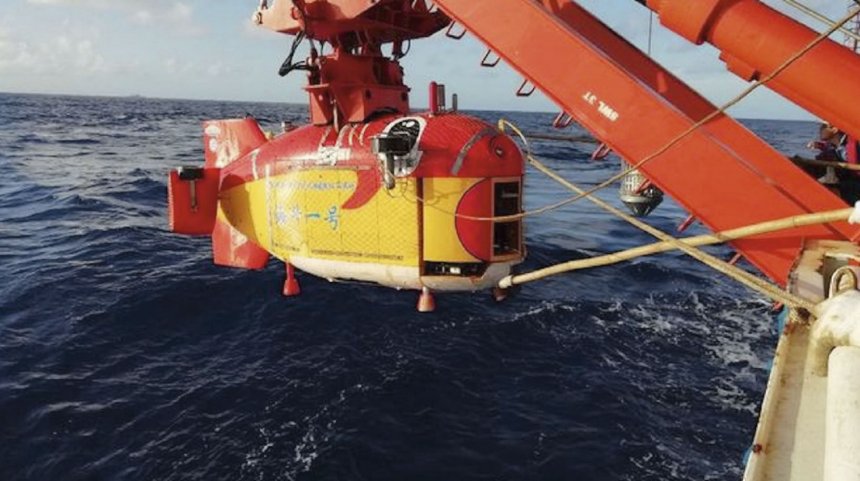 Haidou-1 seen being recovered by the research ship Tansuo-1 . (Shenyang Institute of Automation)

Detailed specifications of the AUV have not been disclosed by CAS, although still and video imagery of the vehicle indicates that it is equipped with a pair of altitude thrusters fore and steerable hydroplanes with built-in thrusters towards the aft.

According to state media, Haidou-1 was dispatched from the research vessel Tansuo-1 and reached a depth of 10,907 m (35,784 ft) in the Mariana Trench on 14 May – a new record for Chinese underwater vehicles – during one of four deepwater surveys performed under the auspices of the TS-17 scientific mission.

The AUV was also seen travelling on the seabed performing tasks such as sample collection and marker laying in video footage aired by state broadcaster CCTV, and is claimed to have provided researchers with valuable information on geological, biological, and chemical data, and ocean currents.