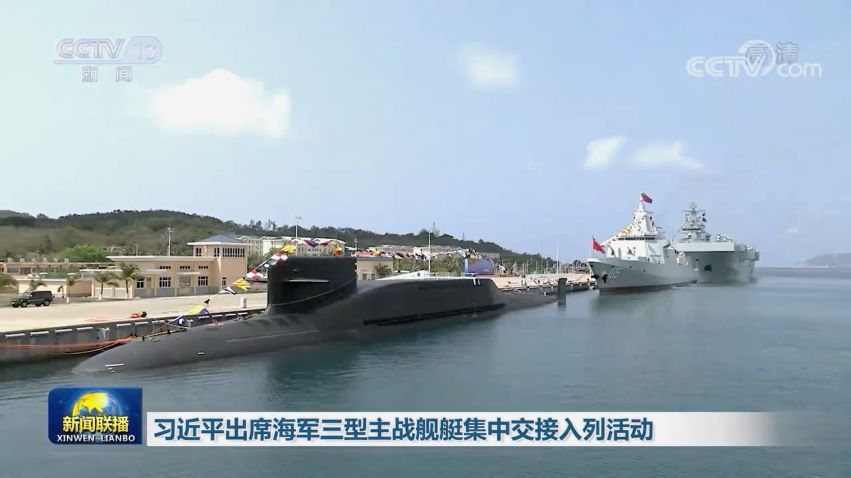 A screengrab from footage released by CCTV on 24 April shows the three vessels the PLAN commissioned the previous day in a ceremony held at the Yulin Naval Base on Hainan Island – Type 094 SSBN Changzheng 18 , Type 055 destroyer Dalian , and Type 075 LHD Hainan . (CCTV 13)

The ceremony was held at the Yulin Naval Base on Hainan Island on the 72nd anniversary of the PLAN’s founding, and was attended by Chinese President Xi Jinping, resulting in extensive coverage by the state broadcaster China Central Television (CCTV). This contrasts with other commissioning events such as the entry into service of the PLAN’s second Type 055 destroyer and the previous Type 094 SSBNs, which were not officially announced.

The Type 075 LHD, named Hainan (with pennant number 31), is an indigenous design that marks a significant achievement in terms of shipbuilding and in the potential enhancement of China’s amphibious assault capabilities.

Hainan was built at the Hudong-Zhonghua shipyard in Shanghai and launched on 25 September 2019. Designed to support amphibious landings using helicopters and surface craft, its flight deck has landing spots to enable the concurrent operation of seven helicopters. For the commissioning ceremony, eight Z-8CJ helicopters were arranged on deck, indicating that the number of these aircraft in service is steadily growing, which will increase the capabilities of the PLAN Marine Corps.