Bulgaria is to be gifted surplus Lockheed Martin F-16 Fighting Falcon aircraft to help prepare the country for the arrival of its first F-16V Block 70s. 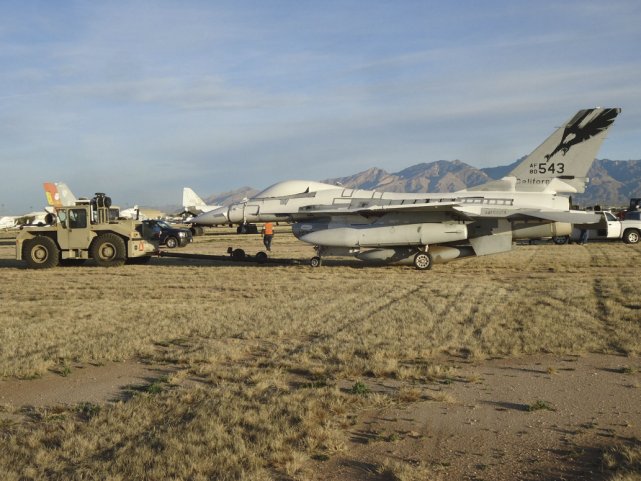 A surplus US Air Force F-16 at the boneyard at Davis-Monthan Air Base, Arizona. Bulgaria is to be gifted two such aircraft to help prepare the country’s air force for the latest F-16V Block 70 from 2023. (309th Aerospace Maintenance And Regeneration Group)

The donation, announced by the US embassy in Sofia on 20 October, comprises a pair of decommissioned US Air Force (USAF) F-16s that will be used to train pilots and maintainers on the type ahead of the Bulgarian Air Force (BuAF) receiving the first of its eight F-16Vs.

“In conjunction with [US State Department Assistant Secretary for Political and Military Affairs] R Clarke Cooper’s visit [to a number of Bulgarian air bases and facilities], the United States Embassy in Bulgaria is pleased to announce that the United States Air Force intends to provide two decommissioned F-16 aircraft to the Bulgarian Air force, subject to the approval of the United States Congress,” the embassy said. “At the request of Bulgaria’s government, these two airframes will be transferred through the US Department of Defense’s Excess Defense Articles (EDA) programme for use as training aids and general familiarisation tools for Bulgarian Air Force personnel.”

The announcement was made during a visit by Cooper to the USAF’s F-16 equipped 31st Fighter Wing, which is on temporary NATO enhanced air-policing duties at Graf Ignatievo and Bezmer air bases. The embassy did not specify the variant or the block of the surplus F-16s to be donated, nor did it specify if these ‘decommissioned’ jets will be flight-worthy or used only for ground-based training.