Boeing presented the first F-15QA Advanced Eagle combat aircraft during a ceremony at the company's St Louis production facility in Missouri on 25 August. 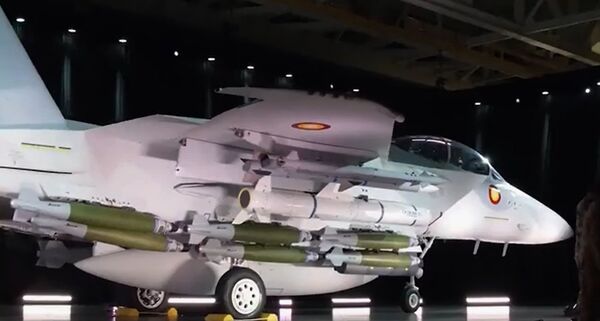 A screenshot from a Boeing video of the roll-out of the first F-15QA for Qatar, with the aircraft seen fitted with a range of weapons and systems. (Boeing)

The event saw Boeing and US Air Force (USAF) leaders, as well as dignitaries and service personnel from Qatar, roll-out the first aircraft for the Qatari Emiri Air Force (QEAF) at the same time as announcing the type's official name, Ababil (a flock of birds that have particular significance in the Quran).

The F-15QA revealed to the crowd, serial QA500, was fitted with a range of weapons that will equip the type in QEAF service, including the Raytheon AIM-9X Sidewinder short-range air-to-air-missile, the Raytheon AIM-120 Advanced Medium-Range Air-to-Air Missile (AMRAAM), the Boeing AGM-84A Harpoon anti-shipping missile, and the Boeing GBU-31 Joint Direct Attack Munition (JDAM) precision-guided bomb. It was also fitted with both AN/AAQ-28(V) Litening and AN/AAQ-33Sniper advanced targeting pods, as well as an integrated AN/AAS-42 Tiger Eyes infrared search and track (IRST) system. The first 15 pilots to be trained on the type were also presented to the audience.

The first set of F-15QA jets will be ferried to Qatar later this year following the completion of pre-delivery pilot training, Boeing said. The company has been providing maintenance and logistics support for the QEAF during pre-delivery pilot training, which began earlier this year. In addition, Boeing will establish and operate an aircrew and maintenance training centre for the QEAF at Al Udeid Air Base in Qatar through to 2024 while also providing in-country spares and logistics support once the aircraft are delivered.

Boeing presented the first F-15QA Advanced Eagle combat aircraft during a ceremony at the company's ...