Boeing Australia has for the first time conducted a taxi test of the ‘Loyal Wingman’ unmanned aerial vehicle (UAV) it is developing in partnership with the Royal Australian Air Force (RAAF) ahead of the platform’s first flight, which is slated for later this year. 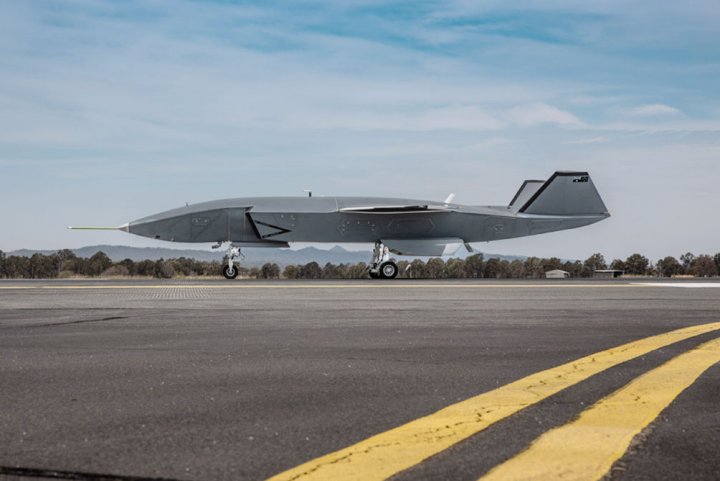 Boeing Australia announced on 22 October that it completed the first taxi test of its ‘Loyal Wingman’ UAV ahead of the aircraft’s first flight later this year. (Boeing Australia)

Reaching a maximum speed of 14 kt (approximately 26 km/h) on the ground, the aircraft “demonstrated several activities while manoeuvring and stopping on command”, said Boeing in a 22 October statement.

“The low-speed taxi enabled us to verify the function and integration of the aircraft systems, including steering, braking, and engine controls, with the aircraft in motion,” Paul Ryder, Boeing Australia Flight Test manager, was quoted as saying.

Air Vice-Marshal Cath Roberts, head of air force capability for the RAAF, was quoted as saying, ”Seeing the prototype take to the runway for this low-speed taxi test is an exciting moment – another significant development milestone ahead of its first flight.”

The milestone follows Boeing Australia’s announcement on 15 September that it had completed an engine run as part of ground testing and preparations for the first flight.

The company had rolled out the first prototype of its ‘Loyal Wingman’ unmanned aircraft system (UAS) on 5 May, with a company executive stating at the time that production of the multimission platform could begin in the middle of the decade.

The presentation involved the first of three prototypes for Australia’s Loyal Wingman Advanced Development Program, which will also serve as the foundation for the Boeing Airpower Teaming System (ATS) being developed for the global defence market.

Boeing Australia has for the first time conducted a taxi test of the ‘Loyal Wingman’ unmanned aerial...

Boeing Australia has rolled out the first prototype of its Loyal Wingman unmanned aircraft system (U...