Israel Aerospace Industries (IAI) has finalised development, and is in production of, the Barak ER (Extended Range) variant surface-to-air interceptor, ahead of planned initial deliveries to an undisclosed customer in the third quarter of this year.

Developed with company internal research and development (IRAD) funding, the Barak ER is a vertical-launch, all-weather, advanced active radar-guided, 50 g manoeuvring interceptor capable of 360° intercepts at altitudes up to 30 km. Powered by a solid fuel dual-pulse rocket motor, with an additional solid-propellant booster, the interceptor is 5.8 m in length (4.8 m interceptor/1.3 m booster), 22.7 cm in diameter (35 cm diameter booster), and has a launch weight of 400 kg. Furnished with a 23 kg blast fragmentation warhead, GPS/INS mid-course guidance and a datalink, the ER variant is effectively identical to the 70 km Barak LRAD interceptor, but with the addition of a booster to achieve the 150 km intercept range.

In early March IAI launched two telemetry-equipped Barak ER interceptors, without a warhead, against IAI purpose-built threat representative manoeuvring short-range ballistic missile targets from a company test range located in the Negev desert, southern Israel. Designed to confirm the end-to-end assimilation and operation of the Barak ER interceptor with the Barak MX system in both land- and naval-based applications, the launches were part of extended series of wider system level tests that concluded in mid-March. Both interceptors were drawn from the new Barak ER production line. 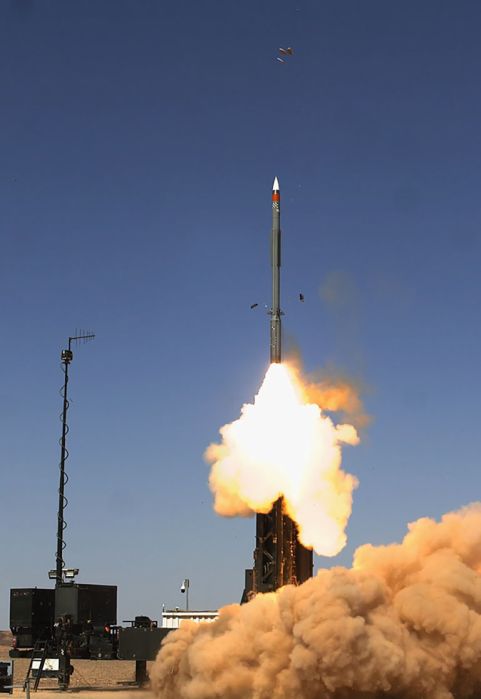