The Department of Defence (DoD) in Canberra announced on 13 July that it will procure an additional 8,500 Enhanced F88 (EF88) Austeyr 5.56 mm rifles to supplement the 30,000 rifles of the same type Thales Australia has been delivering to the Australian Defence Force (ADF) under an August 2015 contract.

Minister for Defence Linda Reynolds said in a statement that the acquisition of the additional EF88s will not only improve the overall capability of the ADF but will also provide a “welcome boost to the workforce in regional Australia”, pointing out that the rifles will be manufactured at the Thales Australia site in Lithgow, New South Wales.

“This acquisition will allow the retirement of older weapons, reducing the cost of sustainment, maintenance and training,” said the minister, adding that, compared with previous rifles, the EF88 “has significantly improved the capability of the soldier through improved range, accuracy, ergonomics and reduced system weight”. 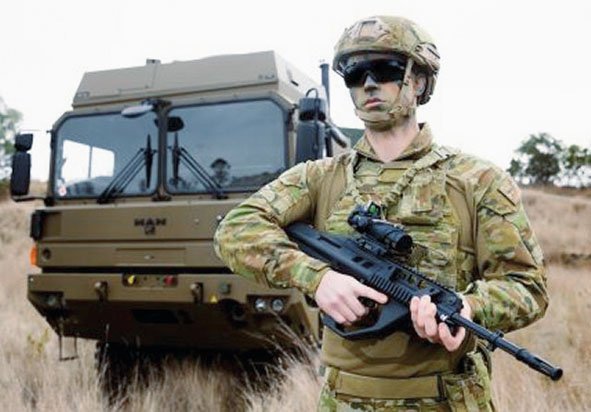 An Australian soldier carrying an EF88 Austeyr 5.56 mm rifle. Canberra announced on 13 July that it will procure 8,500 additional units of this weapon for the ADF. (Australian Army)

The additional rifles, which are being delivered under the lethality element of the ‘Soldier Modernisation Programme’, will enable increased access to the EF88 across the full and part-time force, particularly the army’s 2nd Division, said the minister.

The announcement comes after the DoD awarded Thales Australia an AUD100 million (USD70 million) contract in August 2015 for the production of 30,000 units of the F90 bullpup assault rifle – which is known as the EF88 rifle in ADF service – and approximately 2,500 units of the Steyr Mannlicher SL40 integrated grenade launcher, both of which would be supplied over a period of six years.

The Department of Defence (DoD) in Canberra announced on 13 July that it will procure an additional ...