The potential value of obligations linked to defence offsets and industrial co-operation requirements across the Asia-Pacific region are forecast by Janes to reach about USD143 billion during 2021–30. The figure is based on newly compiled Janes data that links the total value of known market opportunities with the offset protocols of countries in regional markets. 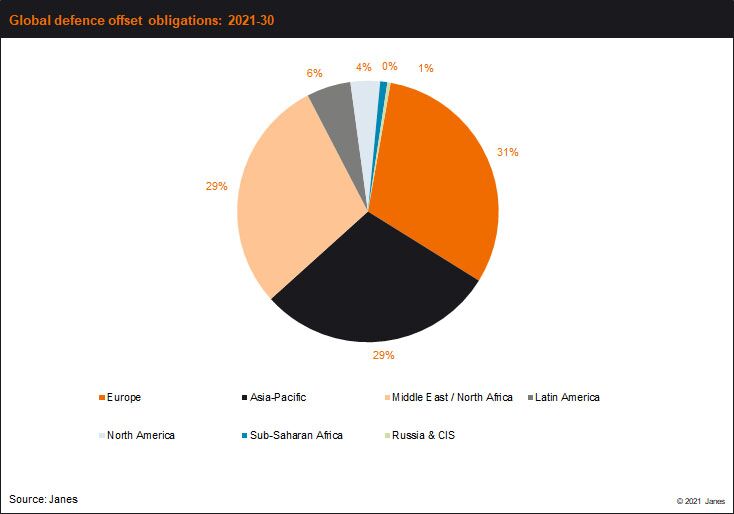 During 2021–30 Europe leads in terms of the value of potential offset obligations, but most requirements in this region are likely to be fulfilled by local industry. (Janes)

In India, the potential value of offsets channelled through military aircraft contracts is forecasted by Janes to be nearly USD18 billion, far ahead of segments including military ships, missiles, and radar, all of which are valued at between USD2–USD2.5 billion.

In other regions Janes data suggests that the potential value of offset opportunities in Europe and the Middle East and North Africa (MENA) will continue to be substantial, although it should be noted that many opportunities in Europe – where industrial capability is much higher – are likely be met by local firms. The forecasted value of offset obligations in MENA is USD141 billion, or around 29% of the global share.

The potential value of obligations linked to defence offsets and industrial co-operation requirement...

India's Ministry of Defence (MoD) signed a contract with Airbus Defence and Space on 24 September to...
Request Consultation