Russia’s JSC Kronshtadt unveiled its new range of small air-launched munitions for unmanned aerial vehicles (UAVs) at the Army 2020 defence exhibition held in Kubinka near Moscow on 23-29 August. These weapons have been developed by a wide range of companies, including the Tactical Missiles Corporation (KTRV) and the Central Research and Scientific Institute of Chemical Machine-building (TsNIIKhM). 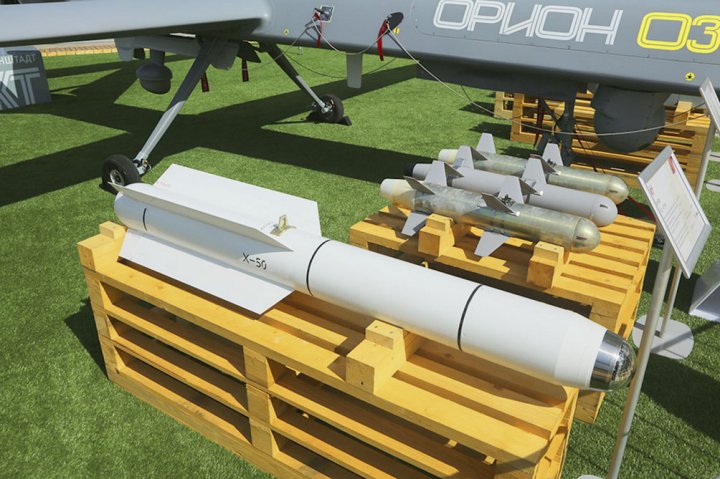 KTRV director general Boris Obnosov told Janes on 26 August, “The corporation is designing new missiles and bombs for UAVs and upgrading existing ones. KTRV is now developing [small] 50–100 kg weapons for the blossoming UAV market.” He said his company is working with Kronshtadt and the Sukhoi Design Bureau on weapons for their UAVs.

At Army 2020, a range of [small] 20–100 kg air-launched weapons was showcased alongside the Orion reconnaissance UAV. The first Orion unmanned aerial system (UAS) comprising three vehicles was delivered to the troops last spring for operational evaluation and is now capable of performing both reconnaissance and combat missions.

KTRV’s 50 kg Kh-50 guided missile can engage small soft skinned ground and surface targets. It is 1.8 m long and has a diameter of 180 mm. The munition has 300 mm fins and carries a 10–20 kg high explosive fragmentation (HE-FRAG) warhead.

TsNIIKhM’s KB-20 guided bomb weighs 21 kg and carries a 7 kg HE-FRAG warhead and a satellite receiver or laser guidance unit. It is 900 mm long and has a diameter of 130 mm and has 350 mm fins. The munition is designed to engage personnel and soft skinned targets.