Hindustan Aeronautics Limited (HAL) has showcased for the first time its Twin-Engine Deck Based Fighter (TEDBF) concept for the Indian Navy (IN), with a scale model displayed at Aero India 2021. 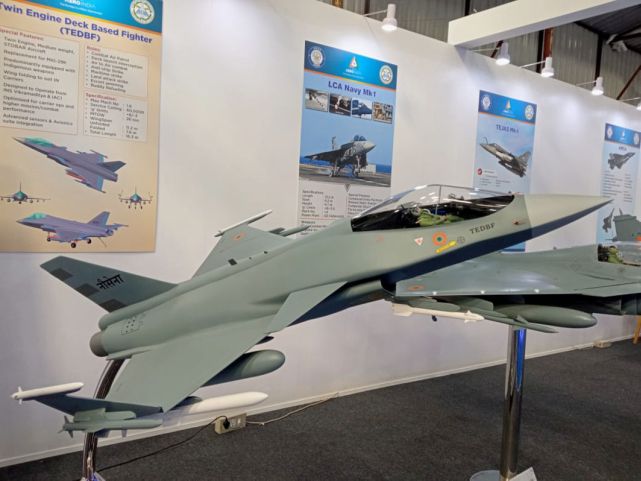 A concept model for the TEDBF for the Indian Navy was shown for the first time at Aero India 2021. (Janes/Akshara Parakala)

Shown during the biennial event at Air Force Station Yelahanka, Bangalore, in the first week of February, the single-seat concept is a development of HAL’s land-based Tejas Light Combat Aircraft (LCA). It has been created in response to the national Multi-Role Carrier Borne Fighter (MRCBF) requirement to augment and eventually replace the IN’s fleet of carrier borne MiG-29K ‘Fulcrum’ fighters.

Other features geared towards its maritime role include folding wingtips for easier stowage on and below deck, and an arrestor hook. Physically, the TEDBF has a wingspan of 11.2 m (7.6 m when folded for carrier stowage), and is 16.3 m in length. With canards located ahead of its wings, the TEDBF is similar in appearance to the Dassault Rafale that is operated by the Indian Air Force. Performance specifications released by HAL give the TEDBF a maximum take-off weight of 26 tonnes; a maximum Mach number of 1.6; a service ceiling of 60,000 ft; and a g limit of +8/-3.

Hindustan Aeronautics Limited (HAL) has showcased for the first time its Twin-Engine Deck Based Figh...