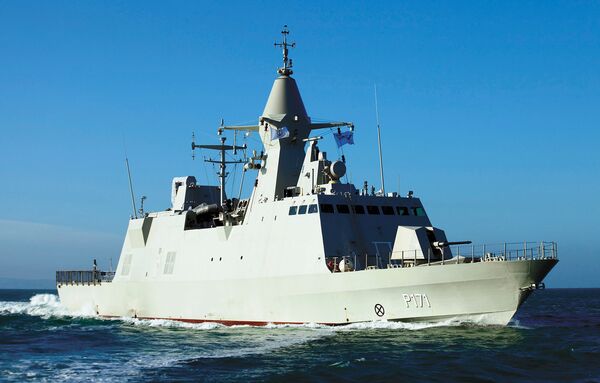 The adoption of a new indigenous combat management system could involve upgrades to vessels such as the UAE Navy's Baynunah-class multirole corvettes. (CMN)

The United Arab Emirates' defence procurement and research organisation, the Tawazun Economic Council, announced on 18 November that it had launched a new project to develop a new combat management system (CMS) for use by the country's navy and coastguard.

Known as the National Combat Management System (NCMS), the system is being jointly developed with the UAE's Marakeb Technologies, as well as a presently unselected foreign company. Tawazun noted in a statement that “talks are currently under way with leading European companies to select the international strategic partner for this project through the Tawazun Economic Program”.

The project is being delivered as part of efforts to reduce cost, support interoperability, and provide a “national solution that will encompass future requirements”, Tawazun added in a statement. The overall development timeline for the project is expected to be four years, ahead of broader roll-out to the country's fleet.

China and Belarus have signed an agreement to co-operate on military technologies, the Ministry of Defence (MoD) in Minsk announced on 29 November.

It said the memorandum on military technical co-operation was signed during a video conference between senior defence officials from the two countries.

The MoD added that the agreement will support “further strengthening and development” between the two countries' militaries and defence establishments. It did not elaborate.

In August 2021 Belarus' State Authority for Military Industry announced that China and Belarus had agreed in principle to “expand the range of areas of military-technical co-operation” between the two countries.

The requirement was outlined in a bilateral working group for “co-operation in armaments and military equipment”, said the state authority. 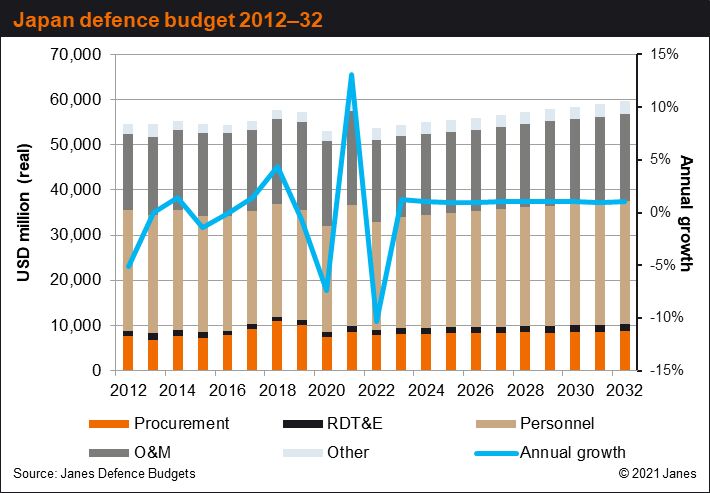 Japan's defence budget for fiscal year 2021 has received a boost of USD6.8 billion. However the country's military expenditure is now forecast by Janes to decline in 2022. (Janes Defence Budgets)

The government of Japan has approved a supplementary defence budget of JPY773.8 billion (USD6.8 billion) for fiscal year (FY) 2021.

Japan's Ministry of Defense (MoD) said on 26 November that the additional expenditure is required to boost Japan Self-Defense Forces' (JSDF) capability in response to escalating security risks in the Indo-Pacific.

The supplementary budget – referenced by the MoD as a ‘defence-strengthening acceleration package' – is in addition to Japan's FY 2021 defence budget of JPY5.34 trillion.

The combined expenditure takes Japan's defence expenditure for the fiscal year, which runs April–March, to more than JPY6 trillion for the first time.

Budgetary documents issued by the MoD show that more than half of the supplementary budget is aimed at supporting the national defence industry.

Senior IN officers and industry officials have told Janes that the Cabinet Committee on Security (CCS) is expected to initially sanction approximately INR500 billion (USD6.67 billion) before mid-2022 to build three 6,000-tonne SSNs at the Ship Building Centre in Visakhapatnam.

The officials said the first of these boats – estimated to cost INR160 billion each – is scheduled for completion around 2032–33.

Financial CCS approval for the remaining three SSNs, which are expected to incorporate more than 95% local content, would follow subsequently as the programme progresses, the officials said. The entire SSN programme would span a 25-year period from when the first boat's construction begins.

The IN's 1999 submarine building programme had envisaged a force of 24 ‘hunter-killer' diesel-electric conventional submarines with air-independent propulsion and land-attack capability. The boats were scheduled to be in service by 2029–30, however, the programme is beset by delays.