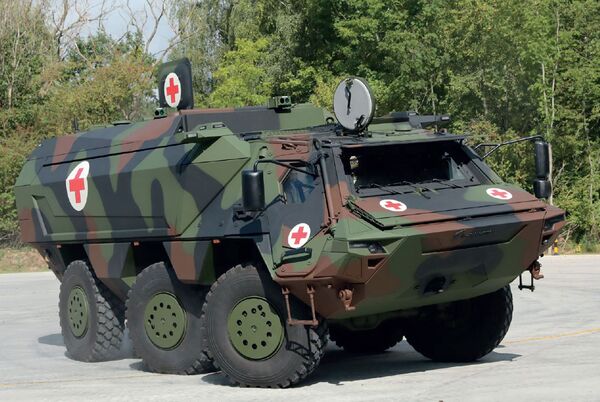 Rheinmetall has developed a high-roof version of the Fuchs wheeled armoured transport vehicle for roles such as armoured ambulances (pictured) and tactical operations centres. (Rheinmetall)

Rheinmetall announced in a press release on 14 October that it has developed a high-roof version of the Fuchs (Fox) 6x6 armoured transport vehicle for roles such as armoured ambulances and tactical operations centres.

The armoured ambulance demonstrator is being presented at the convention of the Gesellschaft für Wehrmedizin und Wehrpharmazie, a German non-governmental organisation devoted to military medicine and pharmaceuticals, in Koblenz on 14–15 October.

The demonstrator's interior volume now measures 12 m 3 and the headroom has been increased from 1.26 m to 1.6 m. The armoured ambulance version can carry two wounded soldiers lying down and two seated.

Images and videos published in early December by Chinese media showed 48 new vehicles being handed over to the brigade at a ceremony at its headquarters, which is believed to be located in Chengdu, Sichuan province. The Western Theatre Command unit is known as the Diamond Brigade.

The vehicles handed over to the brigade included 12 Dongfeng Mengshi (Warrior) 4×4 platforms in command-and-control, reconnaissance, and assault variants.

Identified Mengshi models included the CSK131 and CSK141. The former is regarded as a multirole platform while the latter is described by Dongfeng as a ‘protective assault' platform.

In addition, the Diamond Brigade received 22 China North Industries Group Corporation (Norinco) ZBL-09 infantry fighting vehicles. Images showed that these vehicles were armed with stabilised dual-feed 30 mm cannons that are believed to be copies of the Russian 2A72 gun.

“With this addition, Safran will be able to build a world-leading position in all aspects of PNT,” Safran said on 6 December.

Safran, which has more than 76,000 employees, said it intends to “accelerate the development” of Orolia, which employs approximately 435 people, has facilities in five countries, and expects to generate revenue of more than EUR100 million (USD112.9 million) in 2021. Orolia CEO and co-founder Jean-Yves Courtois will continue to lead his firm, which has headquarters in both France and the United States.

Safran expects to complete the transaction by mid-2022, after receiving regulatory approval. It will buy Orolia from French investment firm Eurazeo for an undisclosed sum, and will consolidate it within its Equipment & Defense division. 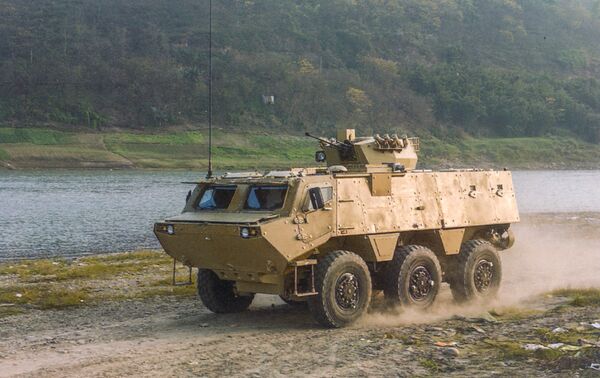 Rheinmetall announced in a press release on 14 October that it has developed a high-roof version of ...