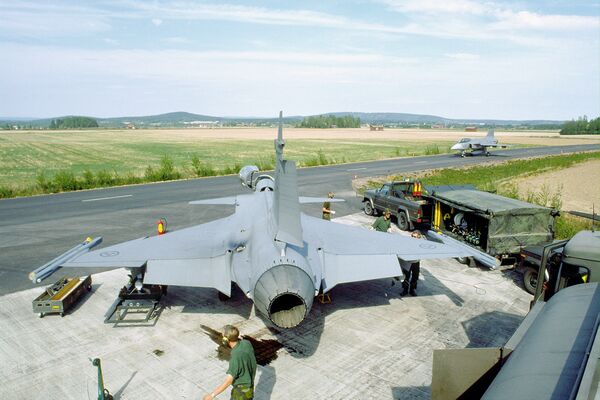 SwAF Gripens seen operating from a dispersed location somewhere in Sweden. The US Air Forces in Europe is keen to learn the techniques to apply to its own Agile Combat Employment doctrine. (Saab)

The US Air Forces in Europe (USAFE) is to learn how the Swedish Air Force (SwAF) conducts the wartime dispersal of its fighter forces.

Speaking to Janes and other defence media on 26 August, the Commander of USAFE, General James B Hecker, said at the Uppsala Airshow that he is sending personnel to Sweden “to see how they do this so well”.

“The ability to disperse aircraft is a speciality of theirs,” Gen Hecker said of the SwAF, adding, “Sweden has got Agile Combat Employment (ACE) down better than any other air force in the world, and we are going to exploit that [knowledge for NATO]. It's very exciting!” According to Gen Hecker, a team from the US Air Force's (USAF's) Air Combat Command (ACC) should arrive in Sweden in the coming days.

The SwAF operates the Saab Gripen C/D and will shortly receive the Gripen E for a mixed force of 100 front-line combat aircraft. Gripen squadrons are divided between northern and southern Sweden, with a distribution that leaves it poised to respond to any incursions of national airspace.

In line with previous Saab designs for the SwAF, the Gripen was built from the outset to operate from small airstrips and straight stretches of road, with the ability to be serviced and turned around between missions in a matter of minutes by a small team of conscripts. In the event of war, dispersing Gripens to predesignated stretches of road and remote landing strips around the country would ensure that they are not easily targeted by an enemy.

The US Air Forces in Europe (USAFE) is to learn how the Swedish Air Force (SwAF) conducts the wartim...