The US Navy Destroyer USS Winston S Churchill (DDG 81) docked in Port Sudan on 1 March, where it joined the Russian frigate Admiral Grigorovich (494), giving the impression of a new struggle for influence in the North African country. 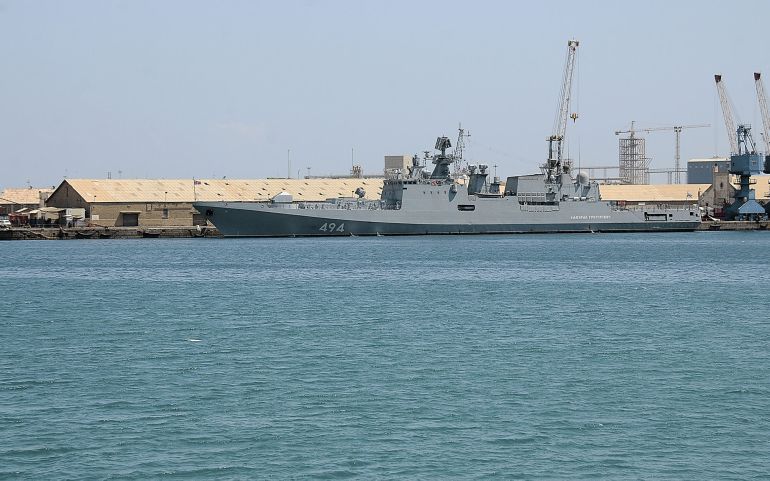 The US Navy’s 6th Fleet noted that Churchill’’s visit followed soon after the Spearhead-class fast transport ship USNS Carson City called at Port Sudan on 24-26 February and that US Africa Command’s (AFRICOM’s) deputy commander for civilian engagement and director of intelligence visited Sudan in January.

“Together with Sudan’s civilian-led transitional government, we are striving to build a partnership between our two armed forces,” the 6th Fleet quoted Rear Admiral Michael Baze, its director of maritime headquarters, as saying. “In just the past few months, we have already seen an increase in military-to-military engagements.”

The Russian Black Sea Fleet announced on 28 February that Admiral Grigorovich had called at Port Sudan. It said the ship would take on supplies and its crew would rest after participating in Exercise ‘Aman 2021’ in the Arabian Sea. Photographs from Port Sudan showed it was still there on 1 March.

The Russian Ministry of Defence previously announced that Dmitry Rogachev (375), one the Black Sea Fleet’s new Project 22160 patrol ships, and the ocean-going tug SB-739 also participated in ‘Aman 2021’, which was led by the Pakistani Navy, although it was unclear if they also called at Port Sudan.

The US Navy Destroyer USS Winston S Churchill (DDG 81) docked in Port Sudan on 1 March, where it joi...