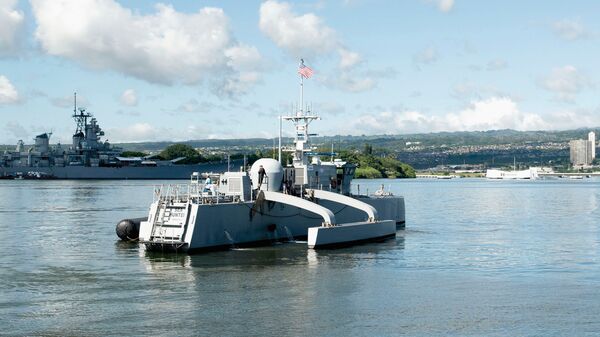 The US Navy incorporated its Sea Hunter medium unmanned surface vessel into the ‘Rim of the Pacific 2022' exercise. (US Navy)

The US Navy (USN) conducted successful operations employing unmanned aerial and surface platforms during Exercise ‘Rim of the Pacific' (‘RIMPAC') between 29 June and 4 August in and around the Hawaiian Islands and Southern California, according to Vice Admiral Roy Kitchener, commander, Naval Surface Forces and Naval Surface Force, US Pacific Fleet.

“I'm a big fan of the experimentation,” Vice Adm Kitchener said on 18 August at a media roundtable discussion during the Surface Navy Association (SNA) 2022 Waterfront Symposium.

“How do we control them?” Vice Adm Kitchener asked. “In the past, we operated them from back here in 3rd Fleet.”

Sea Hawk was outfitted with an anti-submarine warfare (ASW) payload, while Sea Hunter had an electronic warfare (EW) sensor suite, and was controlled by two guided-missile destroyers (DDGs), he noted.

Other manned USN platforms were using onboard sonar suites to conduct ASW while employing Sea Hawk to find and overcome “blind zones”, he explained.

He said, “For the EW suite, we used it for targeting. We've done some work before off Camp Pendleton with the marines.”

Sea Hunter was used to gather find, fix, and tracking data, which was fed into a “broader system”, he said.

He added, “We were collecting data with that sensor package and putting into broader targeting.”

The USN is trying to determine how USVs can be incorporated into overall fleet operations.