The US Navy (USN) on 27 October ended a 24-hour safety stand down for non-deployed aircraft after a pair of crashes in the span of one week.

The stand down provided the USN [with] an opportunity for its aviation commands to focus on how to further improve its operational risk management and mitigation across its aviation enterprise, according to a service statement. The stand down followed a Boeing F/A-18E Super Hornet crash on 20 October near Naval Air Weapons Station China Lake in California in which the pilot ejected safely. 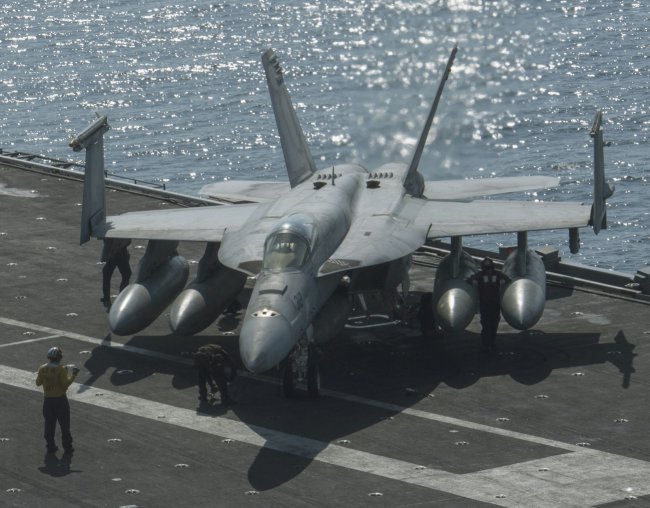 Sailors on 28 October 2020 secure a Boeing F/A-18E Super Hornet, from the “Kestrels” of Strike Fighter Squadron (VFA) 137, on the flight deck of the aircraft carrier USS Nimitz (CVN 68). A F/A-18E crash on 20 October was one of two incidents that prompted the USN on 26 October to institute a 24-hour stand down for non-deployed aircraft. (US Navy)

Two people died on 23 October when a USN Beechcraft T-6B Texan II trainer crashed in a residential area of Foley, Alabama. The deceased were Lieutenant Rhiannon Ross, 30, and US Coast Guard (USCG) Ensign Morgan Garrett, 24. USN spokesperson Lieutenant Michelle Tucker said on 26 October that Lt Ross had amassed more than 1,200 flight hours before she died. No civilians were injured as a result of either crash.

The crashes took place shortly after the USN, on 19 October, declared a milestone with no aviation fatalities in a single fiscal year, FY 2020, since the service began tracking incidents in 1922. Bryan Clark, senior fellow at the Hudson Institute think tank in Washington, DC, told Janes

The US Navy (USN) on 27 October ended a 24-hour safety stand down for non-deployed aircraft after a ...