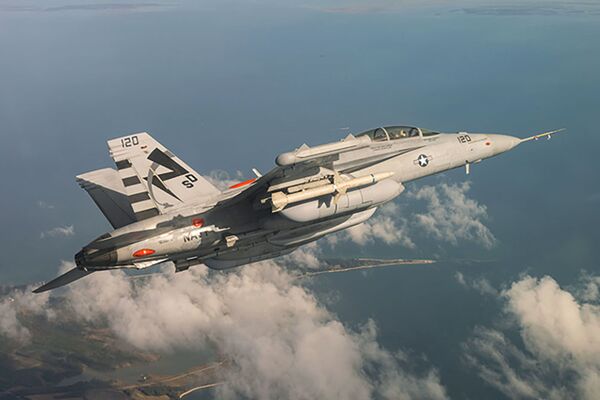 The NGJ0MB seen during flight trials aboard an EA-18G Growler. (Raytheon)

The US Department of Defense (DoD) announced on 2 July that USD171.6 million had been awarded for three Lot 1 LRIP NGJ-MB ship sets for operational testing. The contract will run through to October 2023.

News of the award came just days after Raytheon said that it had completed Milestone C following successful completion of the engineering and manufacturing development (EMD) phase of the NGJ-MB programme.

As previously reported by Janes, Raytheon's NGJ-MB pod is part of a wider Block 2 EW capability upgrade for the Growler, which also includes the NGJ-Low Band (LB) and NGJ-High Band (HB) pods to replace the current AN/ALQ-99 Tactical Jamming System (TJS). In developing three separate NGJ solutions, the USN is looking to enhance the EA capabilities of the Growler in each of the three separate wavebands, as opposed to the current TJS solution that provides a good capability across the entirety of the frequency spectrum.

The US Navy (USN) has contracted Raytheon to commence low-rate initial production (LRIP) of the Next...