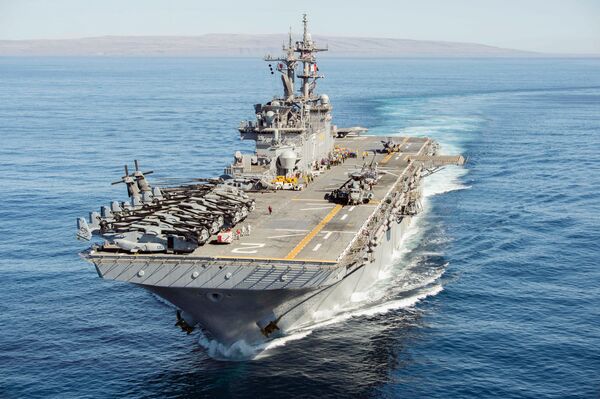 The US Marine Corps is rethinking some of its core operations, anchored by amphibious assault ships. (US Navy)

This modification brings the total advance funding for LHA 9 to USD651 million.

Ingalls is the sole builder of the USN's large-deck amphibious ships, considered to be the centrepiece of the navy amphibious ready groups (ARGs) and the US Marine Corps (USMC) air-ground task forces.

However, the reliance on the ARG concept is in a state of flux and uncertainty with recent USCM plans to revamp its operational concepts.

“The marine corps radically changed its plans for amphibious operations,” Mark Cancian, a retired USMC colonel and senior adviser with the International Security Program at the Center for Strategic and International Studies (CSIS), wrote in a CSIS report about the fiscal year 2022 outlook for the USMC.

“For many years, the navy and marine corps' goal was 38 large [amphibious] ships,” he noted. “Driving this goal was the need to launch an amphibious operation of two marine expeditionary brigades [17 ships each] plus a 10% margin for maintenance.”

However, he pointed out, “Marine Commandant General David Berger rejected this methodology in his initial commandant's guidance. He argued that large amphibious ships were vulnerable in a great power conflict and that the ability of the navy and marine corps to execute a classic landing in the high-threat environment foreseen by the NDS [National Defense Strategy] seemed doubtful.”