The US Department of Defense (DoD) has contracted Bell to build and deliver 12 H-1 helicopters in support of the Czech Republic’s recapitalisation requirement. 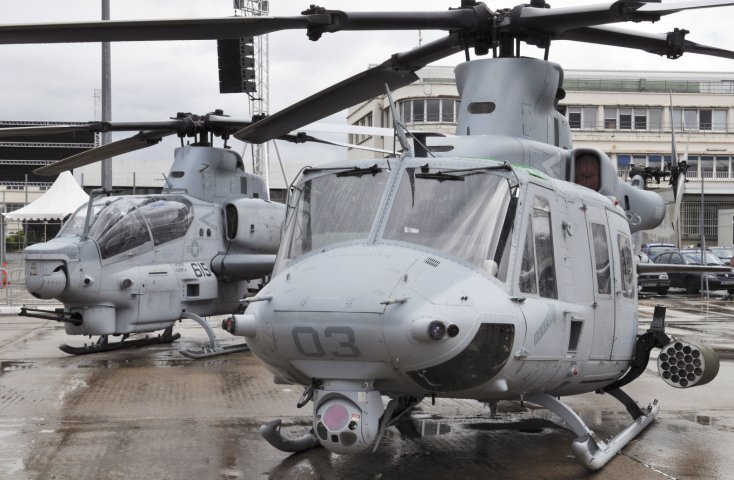 Seen here in US Marine Corps service, the UH-1Y (foreground) and AH-1Z (background) will also be fielded by the Czech Republic. (Janes/Patrick Allen)

The Foreign Military Sales (FMS) award made on 4 September covers eight UH-1Y Venom utility and four AH-1Z Viper attack helicopters as part of a wider effort to phase out the country’s Soviet-built equipment.

As noted by the DoD in its notification, the fixed-price-incentive-firm-target deal is valued at USD272.2 million and will be complete by November 2023. The entire procurement is expected to be worth CZK14.6 billion (USD660 million), excluding value-added tax.

The contract comes nine months after an official signing ceremony for the helicopters was held by the Czech government in December 2019. At that event the US Secretary of Defense, Mark Esper, and Czech Republic Minister of Defence, Lubomir Metnar, signed a Letter of Offer and Acceptance (LOA) for the helicopters that are intended to replace the Warsaw Pact-era inventories of the Armed Forces of the Czech Republic (Vzdusné Síly Armády Ceské Republiky: VS ACR), which include Mil Mi-2 ‘Hoplite’, Mi-8/17 ‘Hip’, and Mi-24 ‘Hind’ helicopters.

The UH-1Y was cleared for sale to the country in October 2017, with the AH-1Z following suit in May 2019, with both approvals including weapons, equipment, training, spares, and support.

The US Department of Defense (DoD) has contracted Bell to build and deliver 12 H-1 helicopters in su...

The Czech Republic has finalised a deal for 12 Bell H-1 helicopters to partially replace its ageing ...

The US State Department has approved the sale of four Bell AH-1Z Viper or 12 Sikorsky UH-60M Black H...