Ebbing Air National Guard Base (ANGB) in Fort Smith, Arkansas, has been selected as one of the preferred locations to host the Republic of Singapore Air Force's (RSAF's) F-16 training detachment and its future F-35B training unit, the Singapore Ministry of Defence (MINDEF) announced on 4 June.

The base was shortlisted by the US Department of Defense (DoD) in consultation with MINDEF following feasibility studies that included a number of factors such as suitability of the location and training area, infrastructure, and logistics support.

As a result, the RSAF's 12 Lockheed Martin F-16C/D multirole fighters will be relocated from Luke Air Force Base (AFB) in Arizona, noted MINDEF. Besides RSAF F-16 aircraft, Luke AFB also hosts F-16s from the Republic of China Air Force that could be transferred to another base in due course, Janes understands. 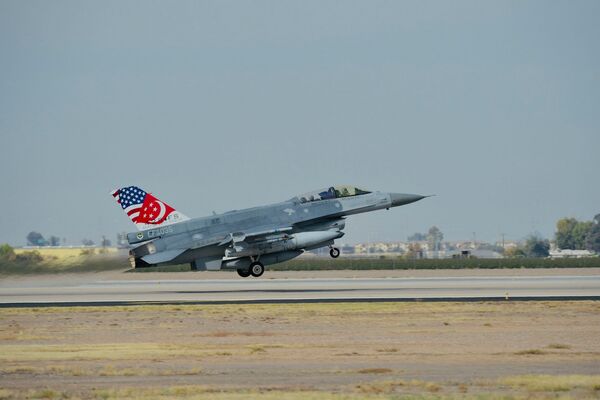 The RSAF's F-16 training detachment is currently based at Luke AFB in Arizona. (RSAF)

In a separate statement issued on 3 June, the US Air Force (USAF) announced that Ebbing ANGB, which is home to the US Air National Guards' 188th Wing, would also become the training centre in the continental United States for Lockheed Martin F-35 Joint Strike Fighter aircraft procured by Foreign Military Sale (FMS) customers, adding that the base will be able to host up to 36 fighter aircraft. The USAF added that the new base will overcome ramp and airspace capacity constraints that limit expansion work at Luke AFB.

Ebbing Air National Guard Base (ANGB) in Fort Smith, Arkansas, has been selected as one of the prefe...

The US Air Force (USAF) has delayed its expected Milestone C decision for the Boeing T-7A Red Hawk j...