The US Air Force (USAF) on 26 March completed the Kratos XQ-58A Valkyrie’s first release from its internal weapons bay, and its sixth flight test.

This test at Yuma Proving Ground, Arizona, conducted in partnership with Kratos and Area-I, demonstrated the ability to launch an Altius-600 small unmanned aircraft system (sUAS) from the XQ-58A’s internal weapons bay, according to a service statement. Kratos, Area-I, and the Air Force Research Laboratory (AFRL) designed and fabricated the sUAS carriage and developed software to enable release. After the release of the sUAS, the XQ-58A completed additional test points to expand its demonstrated operating envelope. 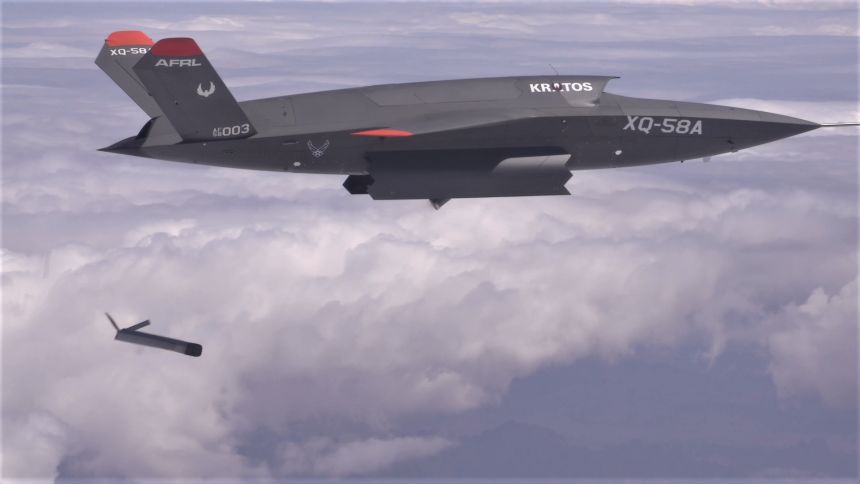 The XQ-58A Valkyrie demonstrates the separation of the Altius-600 sUAS in a test at Yuma Proving Ground, Arizona, on 26 March 2021. (US Air Force)

This was the first time the XQ-58A’s payload bay doors were opened in flight, Alyson Turri, demonstration programme manager, was quoted by the USAF on 5 April as saying. The aircraft, Turri said, also flew higher and faster than on previous flights. The service did not return a request for comment prior to publication.

In December 2020 Kratos received a USD37.7 million contract from the Air Force Life Cycle Management Center (AFLCMC) for Skyborg Delivery Order 2 to integrate, test, and deliver the XQ-58A system, according to a Kratos statement.

The XQ-58A releasing an Altius-600 from its weapons bay demonstrates that the aircraft could be used with sUAS to achieve a cluster munition effect without using actual cluster munitions. Bryan Clark, senior fellow at the Hudson Institute in Washington, DC, told Janes on 6 April that the XQ-58A can probably launch about 12 sUAS, depending on how much space a carriage takes up inside the weapons bay.

Boeing has chalked up two new milestones during flight testing of a pre-production version of the US...