Named Daejeon (with pennant number 823), the 122.1 m-long warship entered the water during a ceremony held on 3 May at DSME’s Okpo shipyard on Geoje Island, and is expected to be handed over to the service in late 2022 following a series of trials, according to an RoKN statement. 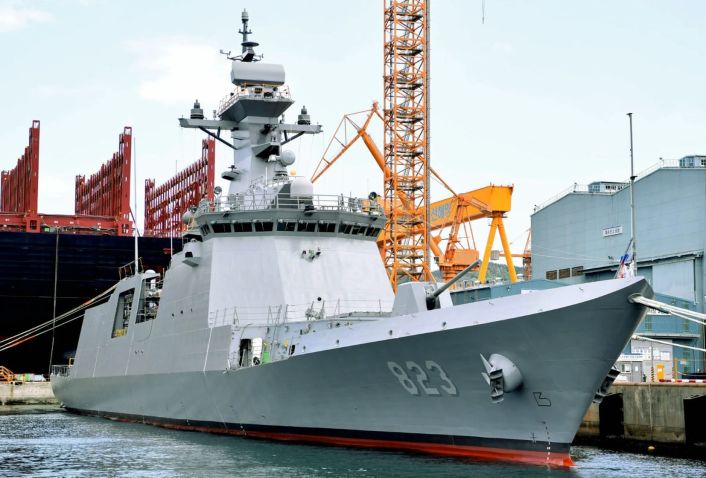 South Korean shipbuilder DSME launched the fifth of eight Daegu (FFX-II)-class frigates on order for the RoKN in a ceremony held on 3 May at the company’s Okpo shipyard on Geoje Island. (RoKN)

Daejeon is one of four frigates of the class ordered from DSME. The first two – ROKS Daegu (818) and ROKS Gyeongnam (819) – entered service in March 2018 and January 2021. The company is also building the sixth frigate on order for the service.

The remaining four vessels of the class – the third, fourth, seventh, and eighth on order – are being built by Hyundai Heavy Industries (HHI).

The Daegu class is a larger variant of South Korea’s six Incheon (FFX-I)-class ships, the first of which entered service in 2013.

The class has an overall beam of 14 m, a standard displacement of 2,800 tons, and a full-loaded displacement of 3,650 tons. Each FFX-II ship is powered by one Rolls-Royce MT30 gas turbine engine and two Leonardo DRS permanent magnet motors driven by MTU 12 V 4000 diesel-generator sets in a combined diesel-electric or gas (CODLOG) configuration. Each of the ships can attain a maximum speed of 30 kt.

The Republic of Korea Navy (RoKN) has received the second of eight Daegu (FFX-II)-class guided-missi...

US Navy looks to tackle LCS reliability and sustainability

Seeking to integrate its Littoral Combat Ships (LCSs) into the overall fleet, the US Navy (USN) is w...