The US Army ‘successfully’ pushed the unmanned-unmanned teaming envelope at Project Convergence 2020 by releasing multiple Area-I’s Altius-600 air-launched effects (ALEs) to communicate and provide target acquisition information to other drones like the MQ-1 Gray Eagle.

After six weeks of testing 34 technologies at Yuma Proving Ground between 11 August and 18 September, the service hosted a capstone event on 23 September to display its ability to use artificial intelligence (AI) and tie together emerging sensor-to-shooter technologies in order to reduce the decision-making cycle from 20 minutes down to 20 seconds. One of the key capabilities touted during the event was the army’s new ALE concept.

“Unmanned-unmanned teaming has tremendous potential on the battlefield and is really just a whole new way of looking at things,” Army Chief of Staff General James McConville told reporters. “That's [already] happening…the concept is being developed, [and] how we use that tactically, will change based on the results we get.”

In total, the army launched six Altius-600 ALEs during the demonstration – some from a UH-60 Black Hawk and others from the ground – before releasing an additional two ALEs from a Gray Eagle following the demo just to show that it was possible. 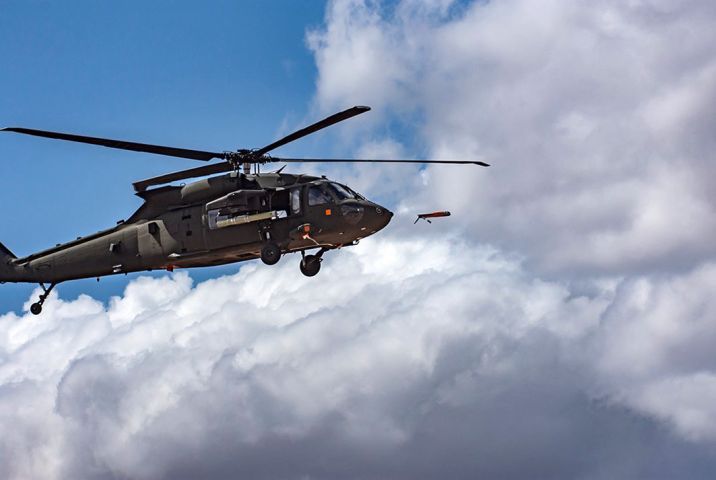 Pictured here is a March demo of a UH-60 Black Hawk launching Area-I’s Altius-600 ALE. The army also used the new ALE in its Project Convergence 2020 demonstration out at Yuma Proving Ground. (US Army)

“We successfully launched six simultaneously from UH-60 Blackhawks in flight, ground-rail launch mechanism, and off the back of a truck,” the army wrote in a 24 September email to Janes . “The ALE not only performed [reconnaissance, surveillance, and target acquisition] missions but were able to extend the mesh network out 61.9 km.”