Ukraine is conducting comparative tests of four remote weapon systems (RWSs) on its BMP-1 infantry fighting vehicles (IFV), the General Staff of the Armed Forces of Ukraine announced on 22 July.

The announcement was made following a visit by the Commander-in-Chief of the Armed Forces of Ukraine, Colonel General Ruslan Khomchak, to one of the training grounds in Chernihiv where the tests were being conducted with specialists from State Research Institute for Testing and Certification of Arms and Military Equipment.

The systems under consideration include the BM-7 Parus, which is used by Ukrainian forces equipped with the BTR-4 8x8 IFV, and the KBA 105A Shkval, which arms the BTR-3s in service with Ukraine. Parus is manufactured by the state-owned Kharkiv Morozov Machine Building Design Bureau and the Zhytomyr Armoured Fighting Vehicle Plant, and Shkval comes from the Construction Bureau of Artillery Armaments.

Other contenders are the Stilet, which is a modernisation of Zhytomyr’s Shkval, and the Spys RWS from private Ukrainian company TechImpex.

According to Janes Firepower, Survivability & Mobility , Stilet is 460 kg lighter than Shkval. Zhytomyr completed a full cycle of factory tests of the RWS fitted onto a BMP-1UMD in 2018. The module, however, has not seen active service with any armed forces. 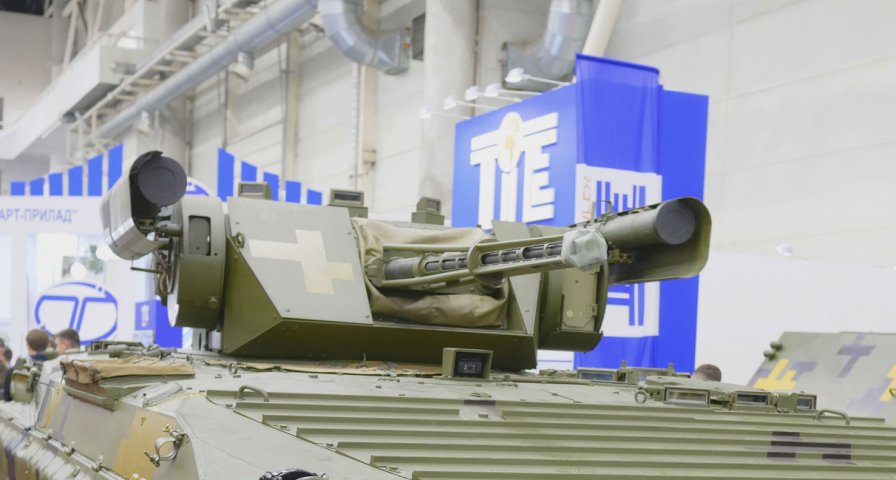 TechImpex fits the Spys RWS to its BTR Varan, a prototype 8x8 developed for the Ukrainian Armed Forces.