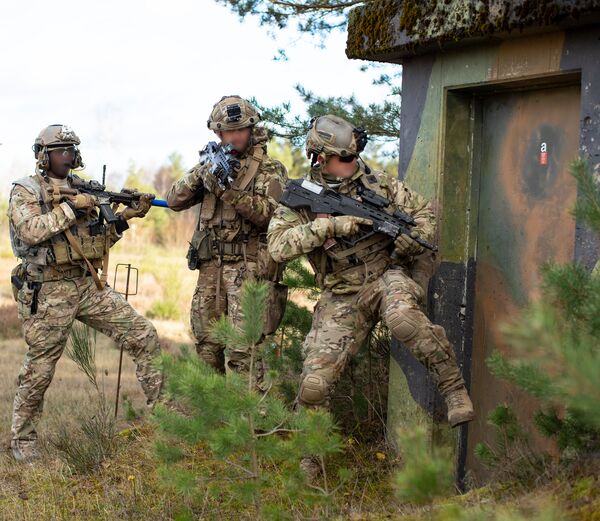 As Russian Armed Forces continue their invasion of Ukraine, minimal information has been published regarding the activities of the Ukrainian Special Operations Forces (SOF), who are playing a pivotal role in the conflict.

The Ukrainian Special Operations Command (SOCOM) was established in December 2015 and has expanded to feature four army special operations regiments; three navy special operations regiments; and two training centres. Its strength lies at approximately 2,000 members, although the objective is to have a total force size of 4,000. Since its inception, the SOCOM has placed an emphasis on developing a modern force with equipment and practices aligned with NATO SOF elements.

In 2015 the Ukrainian Ministry of Defence (MoD) signed a Letter of Intent signalling the SOCOM's plans to co-operate with NATO Special Operations Headquarters (NSHQ) – a move that included the planned certification of SOF units to work alongside their international partners in the NATO Response Force.

Ukrainian army SOF units include the 3rd and 8th SOF regiments, based in Kirovograd and Khmelnytskyi, respectively, and tasked with undertaking direct action and special reconnaissance missions as part of wider internal security campaigns.

In March 2020 the 3rd SOF regiment began the process of undertaking NATO certification, enabling it to support coalition operations through the provision of a Special Operations Land Task Group.

Also included within Ukrainian army SOF is the 61st Jager Infantry Brigade, which was established in April 2019 to provide a capability similar to the US Army's 75th Ranger Regiment. The brigade can be tasked with intelligence-gathering and force-protection missions to support the 3rd and 8th SOF regiments in particular. However, it is also capable of undertaking independent operations.

The SOF training centre in Khmelnytskyi runs the SOF Qualification Course, which handpicks volunteers from across the wider armed forces for service within SOF. The selection course was developed in conjunction with NATO SOF partners from Estonia, Latvia, and Lithuania with just 20% of candidates successfully passing the six-month course and progressing to continuation training. The school has also benefitted from a USD1.5 million investment by the US Department of Defense (DoD), another key supporter of the Ukrainian SOCOM.

Directing staff at the SOF training centre are trained at another SOF facility – the 142nd training centre – located in Berdychiv. The training centre is supported by the US-led Joint Multinational Training Group-Ukraine (JMTG-U), which features NSHQ, Poland's Special Operations Component Command, the US Army's 10th Special Forces Group, and the aforementioned Baltic partners.

The Ukrainian Navy's SOF units include the 140th Special Purpose Centre; 801st Anti-Diversionary Detachment; and 73rd Maritime SOF Centre, which are based in Khmelnytskyi, Mykolaiv, Ochakiv and Maysky Island.

Although capable of conducting ground-based operations, navy SOF units are focused on security in the Black Sea with mission sets ranging from maritime counter-terrorism and combat diving to special reconnaissance and underwater demolitions.

Measuring manpower similar to Ukrainian army SOF, naval units are also broken down into special operations companies and platoons. In 2021 the 140th Special Purpose Centre was certified for NATO special operations following bilateral training initiatives with the likes of the US Naval Special Warfare Command.

In 2019 the MoD also established a dedicated SOF Air Component to support army and navy SOF units. Equipped with Mil Mi-8T helicopters and Antonov An-70 transport aircraft, the SOF Air Component facilitates the insertion, extraction, and resupply of small unit teams across the country.

SOF units also work closely with the Ukrainian Ministry of Interior's (MoI's) ‘Omega' and ‘Vega' CT teams, as well as the National Guard of Ukraine‘s Azov special mission unit, which falls under the operational control of the MoI.

Support from the international SOF community has come from countries such as Canada, Denmark, Romania, and the UK, who have supported the ability of Ukrainian SOF to counter Russian special operations units in particular.

In February 2019 representatives from these countries convened at a conference in Ukraine to analyse the actions of the Russian SOF. The Chief of the General Staff of the Armed Forces of Ukraine at the time, General Viktor Muzhenko, stated: “We already prepared the plans for counteracting various scenarios of crisis situations. Our task is not to slow down the pace of introduction of new standards in training, technical equipment, and comprehensive provision of domestic special operations forces.”

In recent years, Ukrainian SOF have participated in an extensive number of joint training packages with NATO and non-NATO partners. Examples include multiple training programmes with the US Special Operations Command Europe to “extend levels in co-operation and trust in order to defend more effectively against Russian aggression”, according to an April 2021 meeting.

Exercises included the use of CV-22 Osprey aircraft to facilitate fast-rope insertion into target areas in addition to support from MC-130J Commando II fixed-wing aircraft.

Similar exercises have been conducted with the UK MoD, including training of the 73rd Naval Centre onboard the Royal Navy's HMS Dragon .

Concurrently, Ukrainian SOF continued to support the Joint Forces Operation (JFO) in eastern Ukraine following the annexation of Crimea in 2014.

Following a July 2020 ceasefire agreement in Donbas between Ukraine's MoD and pro-Russian militant groups, Ukrainian President Volodymyr Zelensky described how SOCOM “must work more to prevent [provocations by pro-Russian militants] and be more aggressive to counter the challenges posed by the enemy”.

With a target to phase out its inventory of Russian equipment by 2025, the Ukrainian SOCOM continues to receive uplifts in Western materiel – a trend which has been expedited during the course of this latest conflict.

Beyond NLAW, Javelin, AT4 and RPG-26 weapon systems, Ukrainian SOF also received several hundred RPV-16 thermobaric rocket launchers from Ukroboronprom in 2020 following extensive acceptance tests against light armoured vehicles and sheltered enemy forces at ranges up to 1 km. However, any employment during the current campaign is yet to be confirmed.

In terms of mobility, SOF operate AM General High Mobility Multipurpose Wheeled Vehicles (HMMWVs) and rigid-hull inflatable boats, provided by the US DoD. They have trialled indigenously manufactured 4x4 all-terrain vehicles for so-called ‘fly and drive' operations when deployed from the cargo holds of rotary and fixed-wing assets.

Ukrainian SOF also have access to the 4x4 Kamrat armoured personal carrier (APC), which is designed to support special operations with tactical and protected insertion of up to 10 operators.

In June 2020 the US State Department approved the sale of 16 SAFE Boats International Mark VI patrol boats to Ukraine, which would be used to support maritime security operations.

Surface vessels are equipped with Seahawk A2 gun systems, MK44 cannons, FLIR radars, long-range acoustic devices, and other special mission equipment, according to an official statement provided by Washington.

Beyond its existing fleet of Russian helicopters, SOF also have access to MoI H125 and H225 helicopters from Airbus Helicopters, following an agreement signed in 2018.

In terms of intelligence-gathering, SOF are supported by Bayraktar TB2 unmanned combat aerial vehicles (UCAVs) following the completion of evaluation tests in Khmelnytskyi region in March 2019.

A total of 12 UCAVs were procured following an initial purchase agreement in January 2019. The fixed-wing UCAVs can be used to support intelligence, surveillance, target acquisition, and reconnaissance (ISTAR), as well as fire-support missions, and can be equipped with sensor payloads and a selection of munitions.

As Russian Armed Forces continue their invasion of Ukraine, minimal information has been published r...