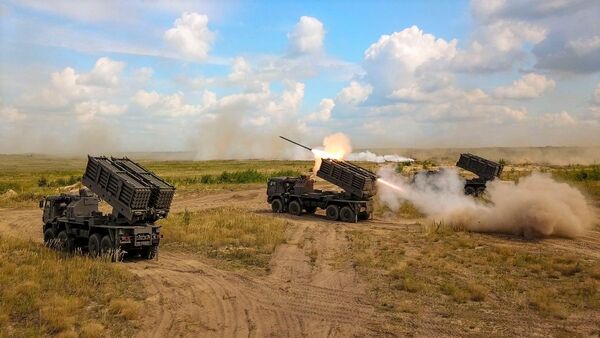 An ISDM Zemledeliye battery in use during the quadrennial strategic-level Zapad-2021 exercise in September. (Russian MoD)

Video circulating on social media since 27 March shows two vehicles launch a full salvo of 50 mine-loaded rockets each, the footage was purportedly taken in Kharkiv Oblast.

The ISDM – inzhenernoi sistem distantsionnogo minirovaniya or engineer system for remote mining – was specifically developed for the Russian Armed Forces' Engineer Troops within the R&D ‘Zemeldeliye-I' framework, and part of a December 2013 contract agreed between the Russian MoD and NPO Splav. Based in the Russian city of Tula, NPO Splav is a prominent developer and manufacturer of multiple launch rocket systems.

The system was first unveiled during the 2020 May Day Parade in Moscow and a preliminary batch is thought to have been delivered to the Engineer Troops earlier in the same year.

A complete system comprises a launch vehicle with 50 122 mm rockets that are loaded with scatterable anti-personnel or anti-tank mines, and a transloader vehicle fitted with a reloading crane on its rear . Both the launcher and transloader are integrated on the KamAZ-6560 8x8 truck and feature an armoured cabin. The rockets are preloaded into canisters and held within a rack, each holding 25 in total. A single vehicle carries two such racks.

The launcher is fitted with communications, fire-control, self-defence, and meteorological sensor systems. Six smoke grenade launchers – three facing either side – form a part of the self-defence system.