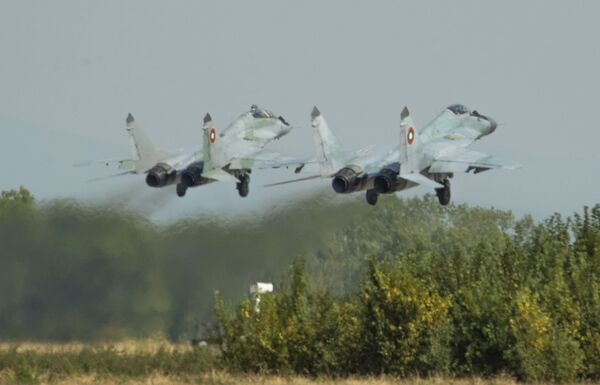 Along with Poland and Slovakia, Bulgaria is a European operator of the MiG-29 combat aircraft (pictured) that the EU is looking to supply to Ukraine to help replace the country's battlefield losses. (Bulgarian Air Force)

The European Union (EU) is to provide the Ukrainian armed forces with combat aircraft to help replace battlefield losses in the face of Russia's renewed invasion of the country.

The High Representative of the Union for Foreign Affairs and Security, Josep Borrell, made the announcement on 27 February, saying that Kyiv had requested the aircraft as part of a wider package of military support from the EU and the West.

As noted by the EU foreign policy chief, Kyiv is requesting specifically those Soviet-era combat aircraft that the Ukrainian Air Force inherited in 1991 and still operates today. These are the MiG-29 ‘Fulcrum' and Sukhoi Su-27 ‘Flanker' multirole combat aircraft, and the Sukhoi Su-24 ‘Fencer' and Su-25 ‘Frogfoot' ground attack aircraft. Of these, EU member states could supply the MiG-29 and Su-25.

If these aircraft were to be donated, the Ukrainian Air Force could receive as many as 52 MiG-29s and eight Su-25s. Although not confirmed, it has been reported that the United States could look to backfill these donated aircraft with Lockheed Martin F-16 Fighting Falcons that are in service with Poland, and which are on order for Bulgaria and Slovakia.

While supplying aircraft would address the immediate problem of replacing attrition losses, Ukraine's main airbases have been subjected to attack, with at least six MiG-29s destroyed on the ground at Ivano-Frankivsk Airport in the southwest of the country. However, as was common with Soviet-designed aircraft, both the MiG-29 and Su-25 operate from less than sterile airfields, with features such as air intake gates to prevent the ingestion of foreign object debris (FOD) and nosewheel protectors to prevent stones damaging the underfuselage. Also, the Ukrainian Air Force is known to have trained for off-site operations, and so could conceivably move its aircraft away from its airfields and on to the country's roads.

The European Union (EU) is to provide the Ukrainian armed forces with combat aircraft to help replac...