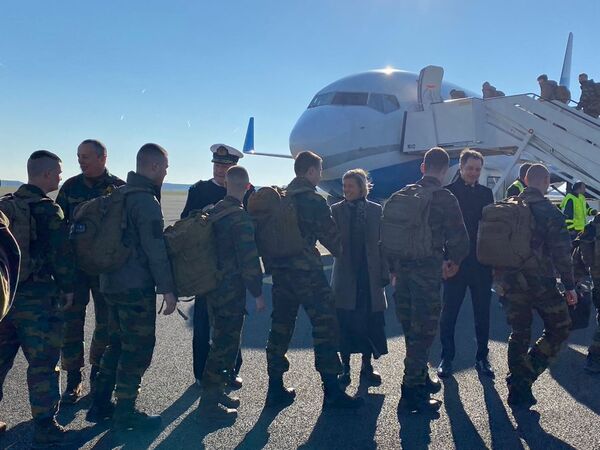 Some 135 members of the Belgian contingent of the NATO VJTF were flown to Constanta, Romania, from Melsbroek on 8 March. (Belgian Defence)

Some 135 members of the Belgian contingent of the NATO Response Force (NRF) Very High Readiness Joint Task Force (VJTF) were flown by chartered aircraft to Constanta, Romania, from Melsbroek, the military part of Brussels airport, on 8 March. They were the last of 300 Belgian soldiers deploying to Romania, along with 500 French troops, to form a Franco-Belgian tactical group in response to the Russian invasion of Ukraine.

They were preceded by an avant-garde airlifted by a Belgian air force A400M transport from Melsbroek to Romania on 4 March to prepare the integration into the battalion commanded by France.

Most of the Belgian contingent is drawn from the Bataillon 1/3 de Lanciers (1/3 Lancer Battalion), based in Marche-en-Famenne in southern Belgium, joined by combat engineers, logisticians, signals troops, and medics.

The avant-garde was followed on 5 March by over 100 vehicles that transported the Belgian contingent's vehicles and materiel in five convoys from Marche-en-Famenne to Romania. The Belgian contingent includes Piranha and Dingo wheeled armoured vehicles, with anti-armour capabilities provided by vehicle-mounted and tripod-launched Spike missiles.

The contingent will work closely with the French Army's 27ème Bataillon de Chasseurs Alpins (27th Mountain Infantry Battalion), with which it is forming a Franco-Belgian tactical group, and will train and exercise with French, Romanian, and US troops also based at Constanta.

Some 135 members of the Belgian contingent of the NATO Response Force (NRF) Very High Readiness Join...