The commanders of both the UK and US Marine Corps (USMC) Lockheed Martin F-35B Lightning units recently embarked aboard HMS Queen Elizabeth have described the “seamless” integration of their respective personnel and machines on their inaugural training deployment and exercises earlier this year. 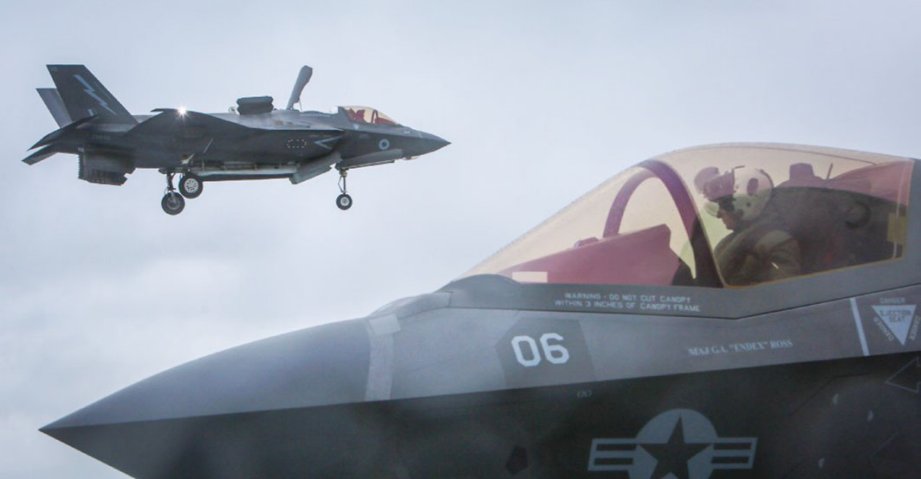 A UK F-35B in the hover prior to landing aboard HMS Queen Elizabeth while a USMC aircraft taxies along the flight deck. The commanders of both 617 Squadron and VFMA 211 described the recent joint training mission as being ‘seamless’ between them. (Crown Copyright)

Speaking to Janes and other defence media on 5 November, Commander Mark Sparrow of the UK’s 617 ‘Dambusters’ Squadron and Lieutenant Colonel Joseph Freshour of the USMC’s Marine Fighter Attack Squadron (VMFA) 211 ‘The Wake Island Avengers’ noted the success of the joint exercises that included the embarkation of 15 F-35Bs from the Royal Navy’s newest aircraft carrier.

“We really gelled well as two units. We worked instinctively together on the ship, and the proof of the pudding of that is what we achieved – we went from [the previous maximum of] four jets to 15 on the deck. The tactical integration between us was seamless,” Cdr Sparrow said, with Lt Col Freshour adding, “From the first day, our integration was seamless. The aircraft were everything we hoped they would be, and with our training and tactics being the same we gelled and integrated really well.”

The commanders of both the UK and US Marine Corps (USMC) Lockheed Martin F-35B Lightning units recen...