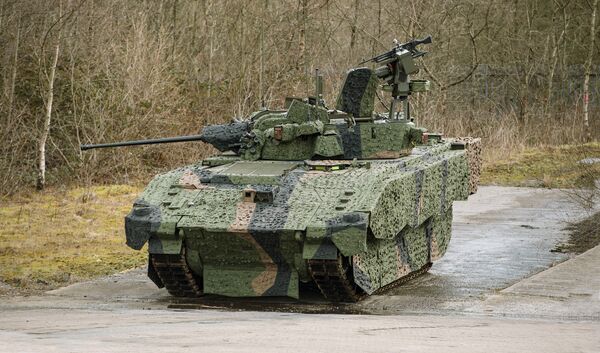 The Ajax reconnaissance vehicle programme now has a full-time minder in the UK MoD. (Crown Copyright)

A senior UK Ministry of Defence (MoD) official has been drafted in to take over the running of the Ajax reconnaissance vehicle programme in a bid to get the troubled project back on track.

Details of David Marsh's appointment as the senior responsible officer, or SRO, for the Ajax programme were posted on the ministry's website on 5 October. Marsh takes over from Major General Simon Hamilton, who was also the British Army's director of support.

According to his appointment letter, Marsh will be working full-time on Ajax (or, as it is also known, the Armoured Cavalry project), whereas his predecessor had to combine that task with running the British Army's equipment support operation and being SRO for several other procurement projects.

Marsh is a 30-year veteran official in the MoD and is director of project delivery in the ministry. He had previously been deputy chief executive of the Defence Science and Technical Laboratory.

Marsh will report both to the MoD's top civilian official, Permanent Secretary David Williams, as well as Nick Smallwood, who is chief executive of the Infrastructure and Projects Authority in the UK government's Cabinet Office.

Williams and Smallwood set Marsh the task of developing “a robust plan to recover and reset [the Ajax programme], then ensure its ongoing viability and delivery”. According to his appointment letter, Marsh is to remain in post “until at least the programme is reset”.

A senior UK Ministry of Defence (MoD) official has been drafted in to take over the running of the A...