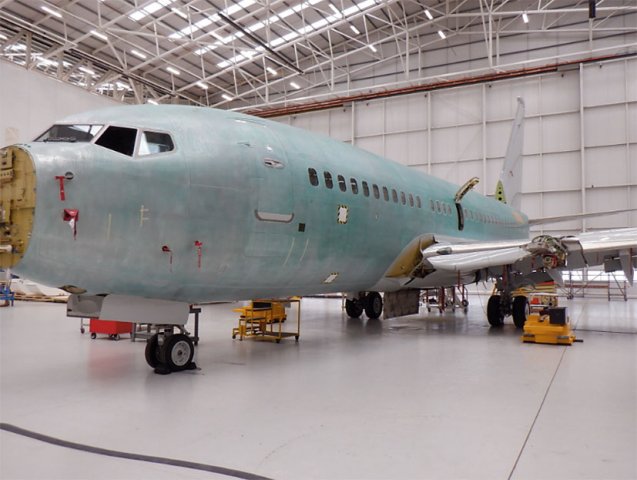 The first 737 being converted into an E-7 Wedgetail AEW1 aircraft for the UK RAF. (Boeing UK)

“Wedgetail has reached another milestone, with the UK MAA approving Boeing and STS Aviation to modify the first aircraft in Birmingham. Working with [the UK’s] Defence Equipment and Support [agency], we’re one step closer to delivering the first E-7 Wedgetail for the RAF,” the manufacturer tweeted.

The MAA approval follows the start of conversions in November 2020, with the first fuselage sections for the first two aircraft being inducted into the line at STS Aviation Services in Birmingham. “Section 46 is the part of the fuselage where the aircraft’s [Northrop Grumman] multirole electronically scanned-array (MESA) radar will be installed,” Boeing UK said at the time, adding that the first Section 46 will begin preparation for inclusion into a 737 Next Generation (NG) airliner later that month.

In May 2020 it was announced that STS Aviation Services would be responsible for converting ‘green’ 737 NG airliners into Wedgetails (this work had previously been earmarked for Marshall Aerospace and Defence Group before the switch for unspecified reasons). Leonardo will be responsible for delivering the aircraft’s defensive aids suite, part of which it will subcontract to Thales UK for its Elix-IR threat warning system and Vicon XF ‘intelligent’ countermeasures dispensing system.

Bell has described its 525 Relentless has being “an ideal aircraft” for the UK New Medium Helicopter...