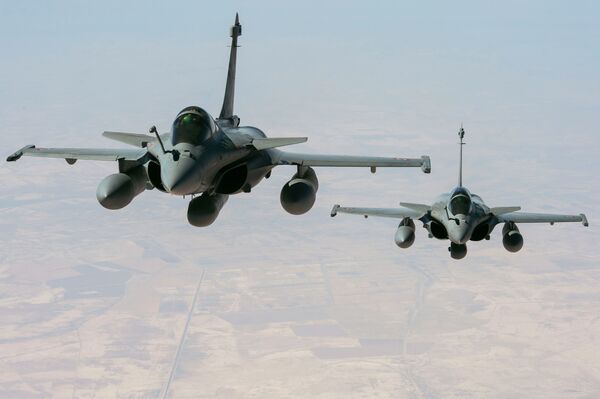 Signed in the presence of the President of the French Republic, Emmanuel Macron, and the Crown Prince of Abu Dhabi and Vice-Commander of the Armed Forces of the UAE, Sheikh Mohammed ben Zayed Al Nahyane, the contract covers the F4 aircraft, representing the first export order for the latest standard Rafale that is set to be rolled out to the French armed forces.

The F4-standard Rafale includes enhancements to the Thales RBE2 active electronic scanned array (AESA) radar, the Thales TALIOS long-range airborne targeting pod and the Reco NG reconnaissance pod; upgrades to the aircraft's communications suite; improved pilot helmet-mounted displays; a new engine control unit; and the ability to carry new weaponry such as the Mica Next-Generation (NG) air-to-air missile and 1,000 kg Sagem Armement Air-Sol Modulaire (AASM) modular air-to-ground precision weapon. Further to the software and hardware improvements, the F4 upgrade will include a satellite antenna, as well as a new prognosis and diagnostic aid system designed to introduce predictive maintenance capabilities. Currently in flight trials, elements of the F4 standard are set to become available as early as 2022, although the wider configuration is slated to be declared operational in about 2025.

The United Arab Emirates (UAE) has signed for 80 Dassault Rafale combat aircraft from France, the ma...