Video footage released by Turkmenistan's state-owned media indicates that the country's navy has commissioned a new corvette based on the C92 design from Turkish shipbuilding company Dearsan.

Named Deňiz Han (pennant number 01), the 91.4 m-long vessel was inducted in a ceremony held at the Turkmenbashi naval base on the Caspian Sea that was also attended by President Gurbanguly Berdimuhamedow, according to a TV report by the Altyn Asyr media network on 11 August.

The report provided few details about the ship, which is believed to have been built in co-operation with the Turkish joint venture between the Gülhan and Dearsan shipyards as part of a deal signed during the 2019 International Defence Industry Fair (IDEF) in Istanbul. The vessel was constructed at a new shipyard near Dzhanga, in Turkmenistan's Balkan Region. 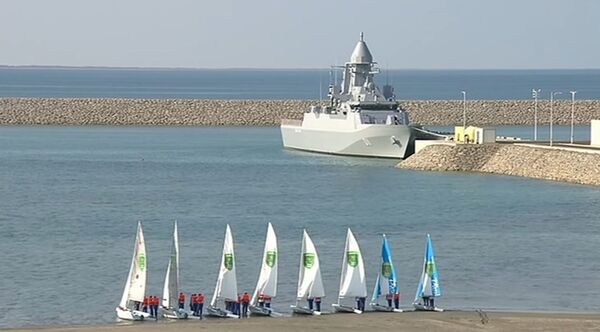 A screengrab from footage released on 11 August by the Altyn Asyr network showing Deňiz Han, Turkmenistan's recently commissioned corvette, during a ceremony held at the Turkmenbashi naval base (Altyn Asyr )

According to Dearsan, the C92 design displaces about 1,600 tonnes, has an overall beam of 13.3 m, and a hull draught of 3.5 m. It can be armed with one MBDA Otomat Mk 2 Block IV surface-to-air missile system, two octuple vertical-launch systems for MBDA's VL MICA short-range anti-aircraft missiles, a 76 mm Leonardo Super Rapid Gun and a 35 mm Korkut-D twin-barrelled close-in weapon system.