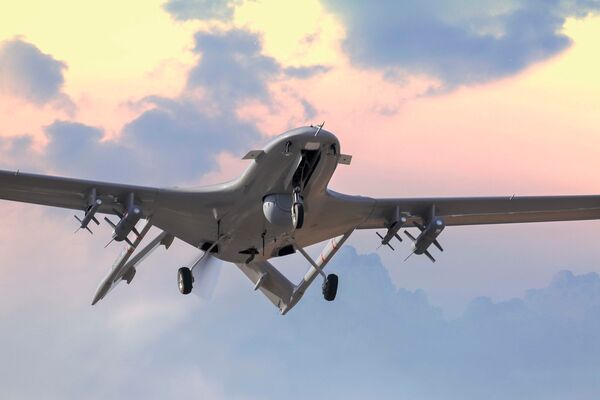 The Turkish-built Bayraktar TB2 is a single-engined MALE UAV that can carry a range of air-to-surface weaponry. (Baykar)

Turkmenistan has been confirmed as a customer of the Turkish-built Bayraktar TB2 unmanned aircraft system (UAS), with the manufacturer posting imagery of air vehicles featuring in a military parade in the country.

Imagery of at least two of the single-engined medium-altitude, long-endurance (MALE) unmanned aerial vehicles (UAVs) being paraded on the back of flatbed trucks during Turkmenistan's 30th anniversary of its independence in late September was posted on the official Twitter account of Baykar Makina.

In parading the air vehicles, Turkmenistan joins Azerbaijan, Qatar, Turkey, and Ukraine in being confirmed operators of the type. Poland recently announced it is also to buy the system.

The Bayraktar TB2 is a MALE UAV that was developed to provide the Turkish Army with a tactical intelligence, surveillance, target acquisition, and reconnaissance capability. According to Janes All the World'sAircraft: Unmanned, the Bayraktar TB2 is 6.5 m long and has a 12 m wingspan. With a maximum take-off weight of 630 kg, the air vehicle can carry up to 55 kg in mission system and/or weapons payload. Performance specifications give the Bayraktar TB2 a cruising speed of 70 kt, a range of 150 km, an endurance of 24 hours, and a service ceiling of nearly 30,000 ft.

Turkmenistan has been confirmed as a customer of the Turkish-built Bayraktar TB2 unmanned aircraft s...