The Japan Ministry of Defense’s (MoD’s) National Institute for Defense Studies (NIDS) has urged Tokyo to increasingly focus on the development of advanced military technologies such as high-power microwave- and laser-based weapon systems to help counter the growing missile threat posed by neighbouring countries.

Such technologies will most likely become a “game changer” in the field of missile defence, enabling Tokyo to shoot down multiple missiles simultaneously while drastically lowering the cost per intercept attempt compared with current technologies, said the NIDS think tank in its ‘East Asian Strategic Review 2021’. 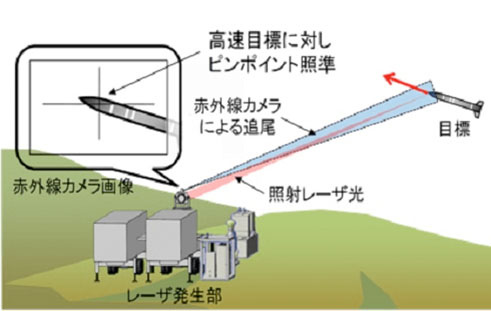 A conceptual image of the high-power laser-based weapon system under development by Japan’s ATLA for the JSDF. (ATLA)

In July 2020 the MoD in Tokyo provided a few more details when it stated in its latest Defense White Paper, “High-power energy weapons, such as electromagnetic railguns, high-power laser weapons, and high-power microwaves, are being expected as a means to counter various airborne threats.”