by Janes Terrorism and Insurgency Centre

Two decades have now passed since Al-Qaeda militants targeted the United States mainland on 11 September 2001. Since the attacks, the fight against transnational militant Islamism has dominated security agendas in the US, Europe, and beyond, costing the US alone over USD 5.4 trillion and claiming the lives of more than 7,000 US military personnel globally. Despite these costs, the threat from militant Islamism has persisted – and indeed proliferated – since September 2001. At this 20-year mark, Janes Terrorism & Insurgency Centre (JTIC) data offers insights on past trends and future forecasts for transnational militant Islamist activity.

Al-Qaeda and the Islamic State represent the most active transnational militant Islamist groups since 2001. According to JTIC data, these groups and their affiliates conducted at least 27,258 attacks between 2009 and 2020, resulting in over 61,124 non-militant fatalities. These attacks have largely targeted conflict theatres in the Middle East – with more than two-thirds of attacks taking place in Syria and Iraq – as well as in East Africa and West Africa. Transnational Islamist violence has targeted security forces in over half of all attacks, and militants have demonstrated a tactical preference for close-quarters engagement between forces on open ground and stand-off/area attacks involving explosives or indirect fire attacks. 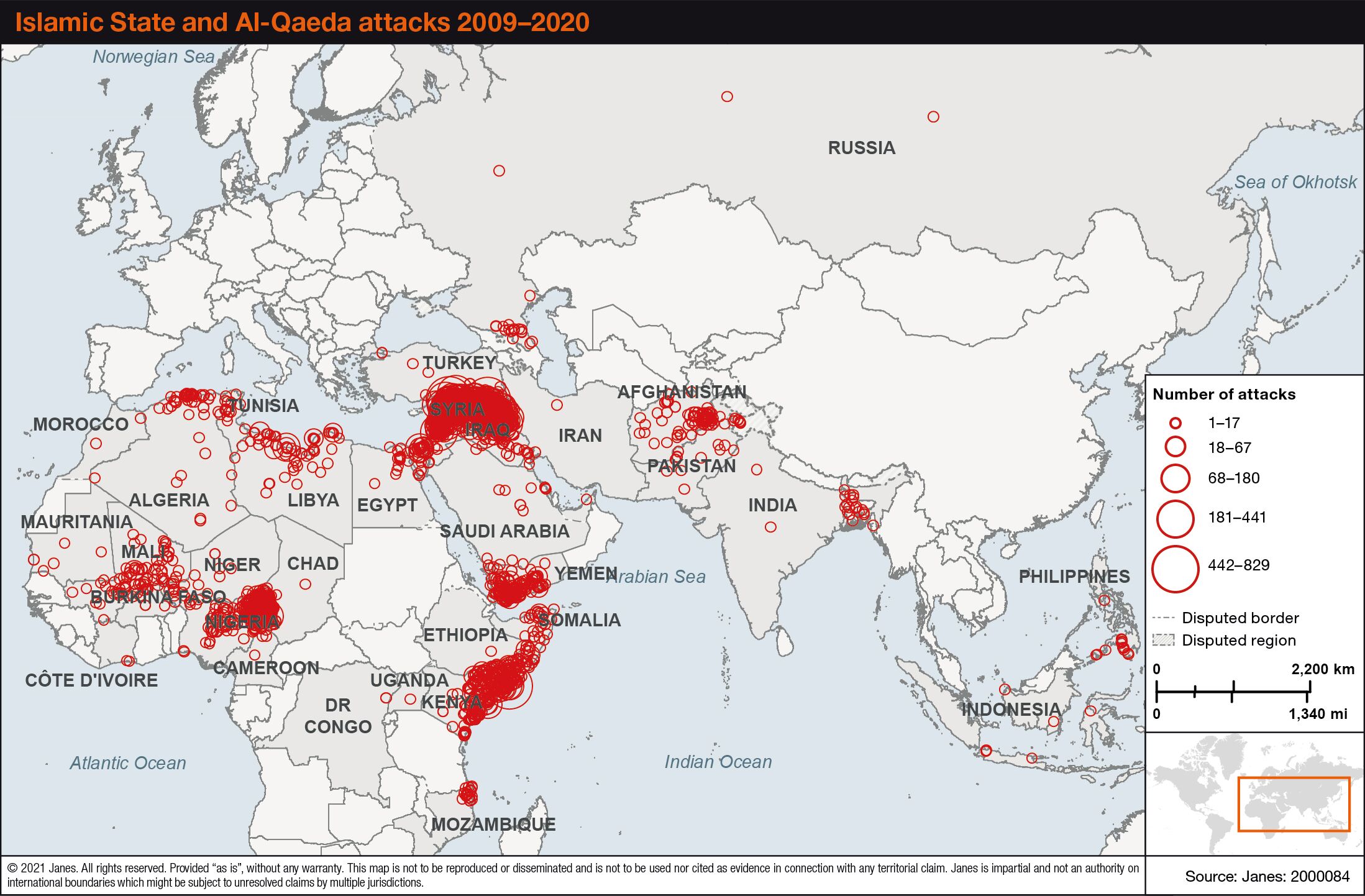 When comparing the operational profiles of Al-Qaeda and the Islamic State, Al-Qaeda has conducted far fewer attacks and its tempo of violence has been steadier than that of its rival. Wilayat Gharb Afriqiyya (West Africa province) was the Islamic State’s most operationally active affiliate in 2020, while Harakat al-Shabaab al- Mujahideen was the Al-Qaeda affiliate that conducted the most attacks in that year. At least 127 inter-group clashes between Islamic State and Al-Qaeda forces were recorded between 2009 and 2020, with the majority taking place in Syria in 2014 and 2015. With 37 lone actor attacks recorded between 2009 and 2020, JTIC data indicates that the Islamic State inspired far more of these attacks than Al-Qaeda, and that most of this activity has been conducted in Europe with edged or improvised weapons.

Based on JTIC data for the first half of 2021, JTIC presents the following regional forecasts for the remainder of 2021:

Lake Chad/Sahel: Attacks and non-militant fatalities are likely to increase because of factors including the 24 May coup in Mali, drawdown of French military forces, the death of Chadian President Idris Déby, and the likely reconciliation of dissident and mainstream factions of Wilayat Gharb Afriqiyya after the death of dissident leader Abubakar Shekau.

Mozambique: A lower tempo of violence is likely to continue in the short term, with Wilayat Wasat Afriqiyya (Central Africa province) attacks having decreased significantly in Cabo Delgado province in early 2021 in contrast to 2020. Smaller-scale raids are likely following the recapture of Mocimboa da Praia by security forces in August, though militants may exploit security gaps after the Southern African Development Community’s (SADC) withdrawal in October.

Syria: Islamic State attacks in 2021 appear set to outpace those recorded in 2020, with militants having already conducted 80% of the total number of 2020 attacks in the first half of 2021 alone. Recent operational trends indicate that attacks will continue to target security forces, with an increasing focus on ambush tactics.

Iraq: Islamic State militants are likely to continue to conduct asymmetric, low-casualty attacks in rural areas and – in future summers – will likely continue to exploit high temperatures to disrupt essential services, provoke popular unrest, and undermine the government in Iraq through sabotage attacks. 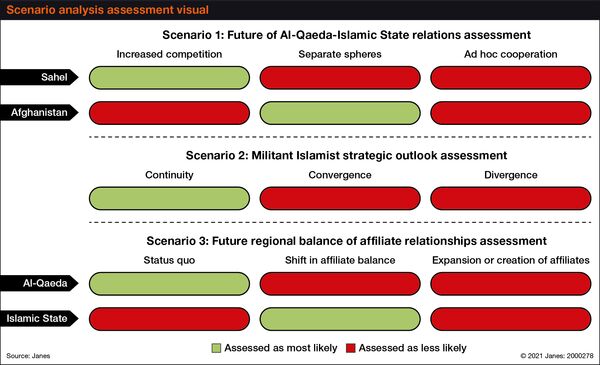 Counter-terrorism priorities today are starkly different to those immediately after the September 2001 attacks, when there was a surge of counter-terrorism investment in the US, Europe, and beyond. US counter-terrorism activities focused on long-term overseas operations, militarised responses, and leadership decapitation, with a lesser focus on tackling the drivers of militant recruitment and radicalisation. In the early 2020s there has been a marked shift toward reducing military commitments overseas, with US forces withdrawing from Iraq and Afghanistan, and France signalling a drawdown of its military presence in the Sahel. While boots remain on the ground in key conflict zones, the US and its Western partners are increasingly seeking to support, rather than lead, overseas counter-terrorism efforts.

An analysis of security responses since September 2001 offers insights for policy and practice. As the 20-year anniversary of the September 2001 attacks approaches, counter-terrorism professionals face a diversified threat landscape and an expanded set of policy priorities. Despite shrinking counter-terrorism budgets, there is a continued need to support overseas partners to preserve the gains of the last two decades and prevent the emergence of future transnational threats. The last 20 years have signalled that over-reliance on short-term, militarised responses without commitment to strengthening local governance and addressing underlying drivers of radicalisation can limit the effectiveness of security responses. Technological advances and high volumes of open-source information also call for streamlined inter-agency coordination, investment in artificial intelligence and machine learning capabilities, and continuous monitoring of the threat environment.

This forms the executive summary of our terrorism and insurgency centre's deep dive into the evolving transnational militant Islamist threat landscape. For the full report, subscribers can log in here.

Janes announced today the formation of its National Security Advisory Board to underpin their commit...