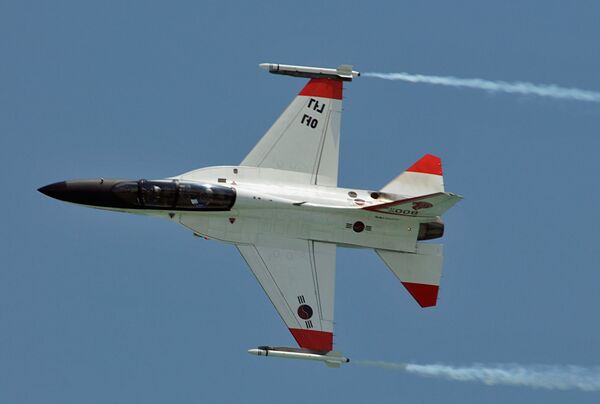 The Royal Thai Air Force has outlined a plan to purchase two additional T-50TH aircraft – a version of the T-50 Golden Eagle (pictured) – for around USD72 million. (KAI)

The planned procurement, which will increase the size of the RTAF's T-50TH fleet to 14, is budgeted at THB2.36 billion (USD72 million) and will include spare parts, and related equipment and tools. Janes understands that a contract to acquire the aircraft is expected to be signed later this year.

A spokesperson from KAI told Janes on 20 July that the procurement is the subject of talks that are under way between the company and the RTAF.

The acquisition is funded through Thailand's 2022 defence budget, having been delayed by a year due to funding constraints linked to the Covid-19 pandemic. Janes understands that such constraints also prompted the RTAF to downsize the acquisition from four to two aircraft.

The RTAF has termed the planned procurement as the fourth and final phase of its T-50TH programme. The RTAF ordered two batches of four and eight T-50TH aircraft in 2015 and 2017 for a total cost of THB12.5 billion. Eight of these aircraft have been delivered.

Phase 3 was a USD52.5 million upgrade of these aircraft announced in 2019 that featured modifications to the aircraft's radar systems, radar warning receivers, and countermeasures.

The Royal Thai Air Force's (RTAF's) Directorate of Operations has announced that it will procure an ...