The Taliban are putting pressure on the outskirts of provincial centres in Afghanistan in a bid to isolate the country's major population areas from the government in Kabul, US Army General Mark Milley, the chairman of the US Joint Chiefs of Staff (JCS), told reporters at the Pentagon on 21 July.

Although none of country's 34 provincial capitals have fallen, the “strategic momentum” appears to be with the Taliban, said Gen Milley, pointing out that the group currently controls about half of Afghanistan's 419 district centres and is currently “putting pressure on the outskirts” of about 17 provincial capitals as well as Kabul.

“A significant amount of territory has been seized over the course of six, eight, 10 months … by the Taliban,” said the JCS chairman, adding that “there clearly is a narrative out there that the Taliban are winning. In fact, they are propagating an inevitable victory on their behalf”. 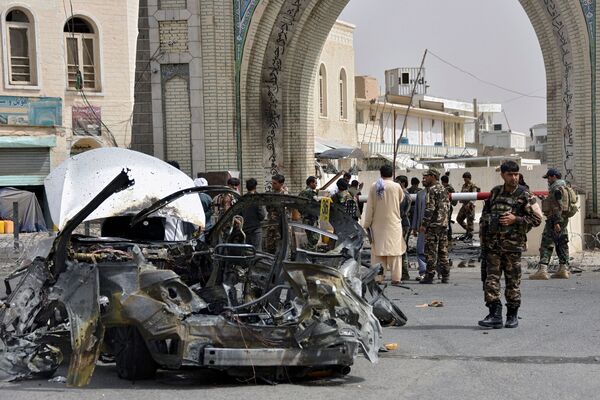 Afghan security forces personnel inspect the remains of a vehicle at the site of a bomb blast in Kandahar on 4 July. Although none of Afghanistan's 34 provincial capitals have fallen, the “strategic momentum” appears to currently be with the Taliban, said US JCS Chairman Gen Milley on 21 July. (Javed Tanveer/AFP via Getty Images)

However, the JCS chairman pointed out that the rapid territorial gains made by the Taliban in recent months are partly due to the fact that the Afghan National Defense and Security Forces (ANDSF) have been consolidating their forces. “Part of this is they're giving up district centres in order to consolidate their forces because they're taking an approach to protect the population, and most of the population lives in the provincial capitals and the capital city of Kabul.”

The Taliban are putting pressure on the outskirts of provincial centres in Afghanistan in a bid to i...

US Secretary of Defense Lloyd J Austin has said the United States is pursuing an “integrated deterre...

Russia has been bolstering its naval and aviation presence in the Mediterranean theatre of operation...
Request Consultation