The Boeing MQ-25A Stingray unmanned aerial vehicle (UAV) has passed fuel to a receiver aircraft for the first time, it was announced on 7 June. 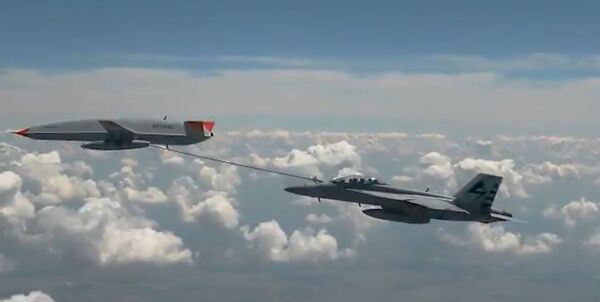 A screenshot from a Boeing video showing the first refuelling contact between MQ-25 T1 and a Super Hornet receiver aircraft on 4 June. (Boeing)

The Boeing-owned test Stingray, MQ-25 T1, passed fuel to a Boeing F/A-18F Super Hornet receiver aircraft during the event on 4 June, marking not just a milestone for the Stingray programme but a first for unmanned aviation also.

“During the initial part of the flight, the F/A-18 test pilot flew in close formation behind MQ-25 to ensure performance and stability prior to refuelling – a manoeuvre that required as little as 20 feet [6.1 m] of separation between the MQ-25 T1 air vehicle and the F/A-18 refuelling probe. Both aircraft were flying at operationally relevant speeds and altitudes. With the evaluation safely completed, the MQ-25 drogue was extended, and the F/A-18 pilot moved in to ‘plug' with the unmanned aircraft and receive the scheduled fuel offload,” Boeing said.

According to Boeing, the milestone came after 25 T1 flights testing both aircraft and Aerial Refueling Store (ARS) aerodynamics across the flight envelope, as well as extensive simulations of aerial refuelling using MQ-25 digital models.

“MQ-25 T1 will continue flight testing prior to being shipped to Norfolk, Virginia, for deck handling trials aboard a US Navy (USN) carrier later this year,” the company said.

The Boeing MQ-25A Stingray unmanned aerial vehicle (UAV) has passed fuel to a receiver aircraft for ...

Advances in supercomputing technology during the past 20 years are one of multiple reasons that the ...