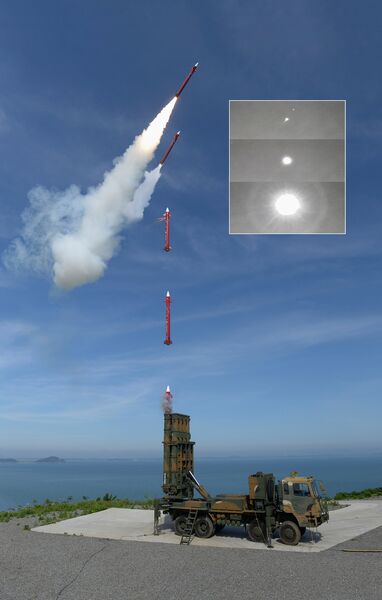 The Cheongung II has a stated missile range of 40 km and can engage targets at an altitude of about 20 km. (DAPA)

South Korea has confirmed the details of its export of the Cheongung II medium-range surface-to-air missile (M-SAM2) to the United Arab Emirates (UAE).

According to South Korea's Defense Acquisition Program Administration (DAPA), UAE's Ministry of Defence on 16 January signed a contract for Cheongung II missile systems with the UAE's Tawazun Technology and Innovation (TTI) organisation and South Korea's LIG Nex1, Hanwha Systems, and Hanwha Defense. DAPA did not state how many systems the deal featured.

The Cheongung II contract was framed by a memorandum of understanding (MoU) signed on the same day between the UAE and South Korea to support medium-to-long-term co-operation in the defence industry and defence technologies. The contract has a value of about USD3.5 billion.

Under the deal the prime contractor is LIG Nex1, which is also acting as systems integrator and is responsible for delivery to the UAE Air Force. Hanwha Defense will produce Cheongung II's launch pad and load/transport vehicle, while Hanwha Systems will manufacture the system's multifunction radar (MFR) .

Hanwha Systems said the Cheongung II has capabilities such as detection, tracking, identification, jamming, and linked communications with radar, aircraft, and ballistic missiles. The company added that it will supply the MFR after improving it to suit the UAE's environment.

South Korea has confirmed the details of its export of the Cheongung II medium-range surface-to-air ...