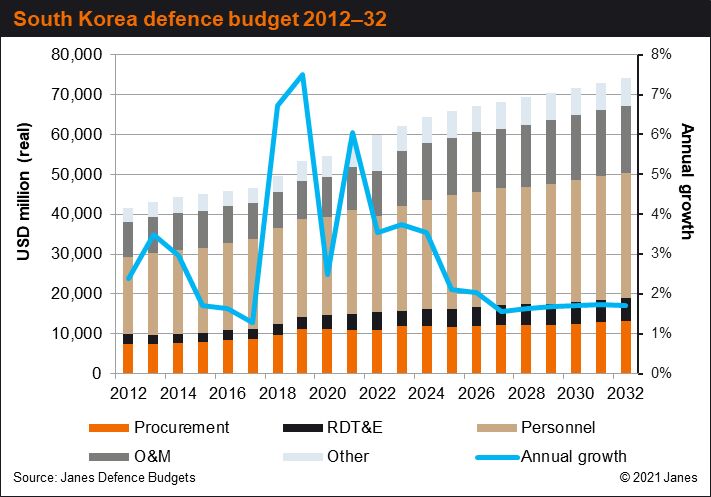 South Korea's defence budget for 2022 has been finalised at KRW54.61 trillion (USD46.32 billion), the Ministry of National Defense (MND) in Seoul announced.

The MND said the new expenditure, approved by the National Assembly on 3 December, is a 1% decline on the KRW55.23 trillion it requested in August but a 3.4% increase over the country's defence budget in 2021.

The increase is lower than in previous years and reflects the country's slowing economy but a requirement to bolster defence capability in response to North Korean military modernisation.

Contained in South Korea's approved 2022 defence budget is KRW37.91 trillion for military operations and KRW16.69 trillion for force modernisation. These figures, compared with expenditures in 2021, represent a 5.8% increase and a 1.8% decline respectively.

The MND attributed the reduction in the force modernisation expenditure to cuts in the budget deliberation process to projects to construct accommodation facilities and procure infantry equipment, unmanned systems, and vehicles.

The MND did not reference Korea Aerospace Industries (KAI's) programme to develop the KF-21 fighter aircraft. However, in the MND's 2022 budget proposal, this project was to receive KRW454 billion.