Singaporean Defence Minister Ng Eng Hen has outlined the latest iteration of the Singapore Armed Forces’ (SAF’s) capability transformation roadmap, which lays out plans to introduce new capabilities that will underpin the country’s defence from 2030 onwards on the back of a record SGD15.5 billion (USD11.44 billion) defence budget set aside for financial year 2019. 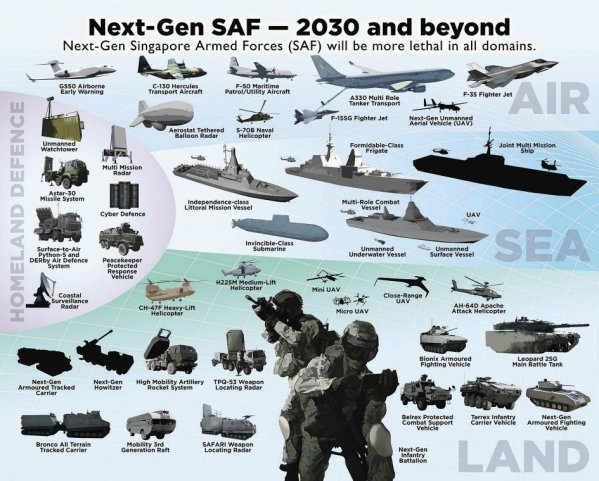 An official infographic detailing some of the Singapore Armed Forces’ future platforms in the 2030 timeframe. (MINDEF)

Speaking at the Committee of Supply Debate in parliament on 1 March, Ng said the Singapore Army will begin receiving its Next Generation Armoured Fighting Vehicle (NGAFV), which is under production by Singapore Technologies Engineering Land Systems, during this year.

“For the army, the [NGAFV] will replace our M113 Ultras as the mainstay of the SAF's mechanised forces from this year onward,” he noted. “Singaporeans will see them soon on our roads at this year’s National Day Parade [in August].”

He added that the NGAFV will be accompanied by the Next Generation Howitzer: a self-propelled 155 mm/52-calibre weapon system that will offer a higher rate of firepower and reduced manpower requirements over the army’s current towed Field Howitzer 2000 (FH2000). Although no further details of the new system were offered, the accompanying infographic depicts a silhouette that closely aligns with ST Engineering Land Systems’ 8×8 Advanced Mobile Gun Systems (AMGS) design, which the company has been marketing for several years.