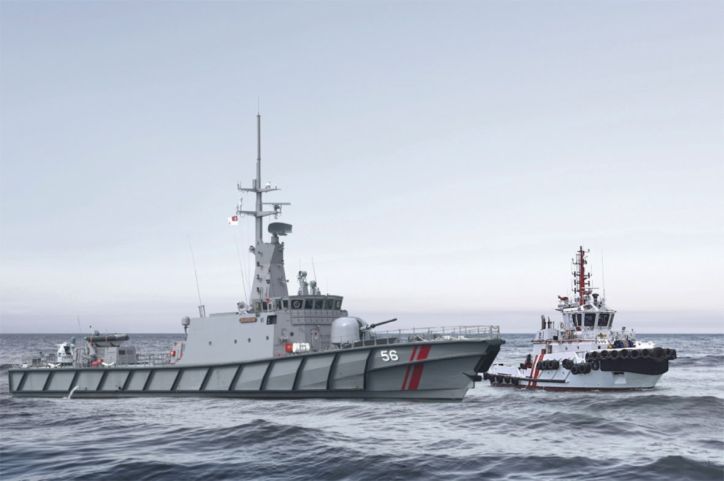 A computer-generated depiction of the Maritime Security and Response Flotilla’s Sentinel-class vessel (left) and response tugboat. (Republic of Singapore Navy)

The Republic of Singapore Navy (RSN) has inaugurated the Maritime Security and Response Flotilla (MSRF), a new construct under the country’s restructured Maritime Security Command, on 26 January at RSS Singapura – Changi Naval Base. The flotilla will initially operate a fleet of four Sentinel-class maritime security and response vessels (MSRVs), and two maritime security and response tugboats (MSRTs).

The Sentinel-class MSRVs are ex-Fearless-class patrol vessels that were previously in service with the RSN, namely MSRV Sentinel (55), MSRV Guardian (56), MSRV Protector (57), and MSRV Bastion (58). Sentinel and Guardian entered operational service on 26 January, while Protector and Bastion will come into service in the coming months.

These vessels retain the 76 mm Oto Melara naval gun that was previously in service on the Fearless class but have additionally been equipped with a Typhoon 25 mm naval gun system at stern. For point defence, the MSRVs are also equipped with 7.62 mm machine gun positions near their bridge wings, and their superstructures have been reinforced with a modular ballistic protection system.

As a non-lethal option, the MSRVs have been equipped with a long-range acoustic device incorporated with a laser dazzler system, and their hulls have been strengthened with fenders so they can come alongside vessels of interest. To denote their role as maritime security vessels, the MSRVs will feature red “racing stripes” as part of their livery.

The Republic of Singapore Navy (RSN) has inaugurated the Maritime Security and Response Flotilla (MS...

The Indian Navy and the Republic Singapore Navy (RSN) have signed a bilateral submarine rescue agree...