The new ballistic helmet is replacing the incumbent set, which is essentially a localised derivative of the Personnel Armor System for Ground Troops (PASGT) helmet developed in the United States from the 1980s, and adopts a high-cut shell that enhances integration with other soldier equipment, such as ear mufflers, tactical communication devices, and night vision sights. 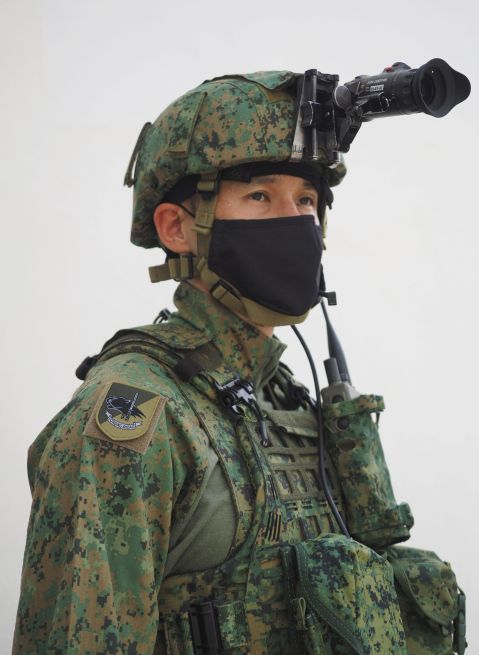 The new load-bearing system comprises the standard and enhanced variants. The enhanced variant, which is being issued to combat units, is seen along with the new high-cut ballistic helmet in this image. (Janes/Kelvin Wong)

The new helmet is also designed to provide an improved fit for local physiques and weighs approximately 10% lighter than its predecessor, with adjustable padding that can be customised to ensure a precise and comfortable fit for individual soldiers. The Ministry of Defence (MINDEF) said in a statement that conscripts enlisted from October 2019 have been issued the new helmet.

The army is also replacing its current integrated load bearing vests (iLBVs) that were introduced from 2009 with the new LBS. Unlike the common iLBV, the new kit is being offered in two variants – LBS (Standard) or LBS (Enhanced) – depending on their specific training requirements and mission profiles.

Lieutenant Colonel Ho Chee Leong, head of the Singapore Army’s Centre of Excellence for Soldier Performance (CESP), told media during a 20 November demonstration at Selarang Camp, that combat units such as the infantry, guards, and commandos will be equipped with the LBS (Enhanced) while personnel who undertake “less physically demanding” operations will receive the LBS (Standard).

The Singapore Army on 2 December launched a new set of personal equipment comprising a new lightweig...