Shangri-La Dialogue 2022: US and allies turn up rhetoric as Beijing vies for regional influence 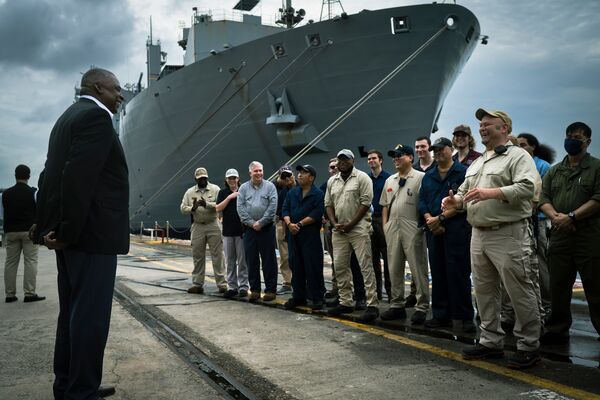 US Secretary of Defense Lloyd Austin speaks with civilians assigned to USNS Carl Brashear (T-AKE-7) at Sembawang Naval Base in Singapore. Austin was in Singapore to participate in the 19th Shangri-La Dialogue. (US Department of Defense)

At the final day of the Shangri-La Dialogue 2022, a representative from China's People's Liberation Army (PLA) took the opportunity to lambast the forum as a pro-Washington event. During a question-and-answer session with Singapore's Minister for Defence Ng Eng Hen, Senior Colonel Zhao Xiaozhuo described the three-day dialogue as a platform that is “dominated by the United States and its allies, serving the interests of the United States and its allies”. “The topics [discussed at the forum] often point to differences rather than co-operation, and divergence rather than convergence,” said the colonel, who serves as a fellow at China's Academy of Military Sciences.

The remark made by the colonel is likely a reflection of the consternation that PLA delegates must have felt throughout the event, which is being held for the first time after a two-year pandemic-induced hiatus. More than 500 participants including at least 40 ministerial-level delegates from the Asia-Pacific, the US, and the Middle East attended the event.

While concerns over the continuing war in Ukraine featured prominently in many of the speeches that were delivered, China was evidently the focal point of the dialogue, given the many references that were made to the country by various delegates, including the keynote speaker and Prime Minister of Japan Fumio Kishida, who spoke on the first day on 10 June.

At the final day of the Shangri-La Dialogue 2022, a representative from China's People's Liberation ...