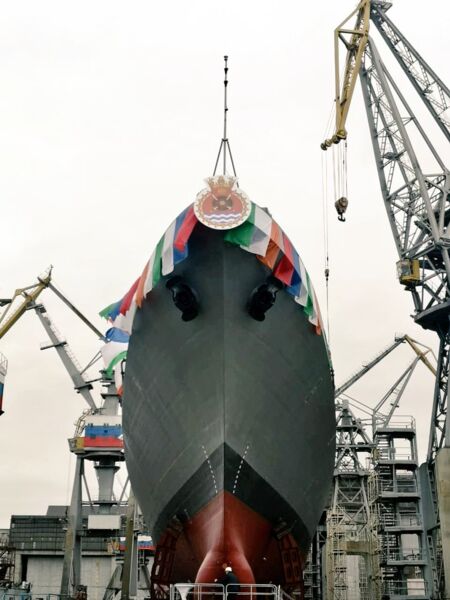 Russia's Yantar Shipyard has launched the first of four follow-on Talwar (Project 1135.6)-class guided-missile frigates being acquired by the Indian Navy (IN) as part of inter-governmental agreements (IGAs) signed between New Delhi and Moscow in late 2018.

Named Tushil , the 124.8 m-long vessel – which will be the seventh ship of the class for the IN – entered the water in a ceremony held on 28 October at the company's facility in Kaliningrad on the Baltic Sea.

Yantar Shipyard is building the first two of the four follow-on (Batch III) frigates, with the remaining two being licence-built by India's Goa Shipyard Limited (GSL) under a transfer of technology agreement.

Yantar Shipyard is using two hulls previously started for Russia, while GSL laid down the first of the two remaining frigates in January 2021 and the second in June 2021. Both GSL-made ships are expected to be delivered from 2026.

Each of the vessels, which derive their design from Russia's Admiral Grigorovich (Project 11356M) class, has an overall beam of 15.2 m and a hull draught of 4.7 m. The Talwar class displaces 4,035 tonnes at full load, and can accommodate a crew of 180, including 18 officers.

In October 2018 India's Ministry of Defence (MoD) signed a USD950 million deal with Russia for the first two ‘Batch-III' frigates. This was followed in November by a USD500 million agreement for GSL to licence-build the other two ships.