Russian personnel are taking an active part in combat operations in the Central African Republic (CAR), according to the UN panel of experts that monitors the country. 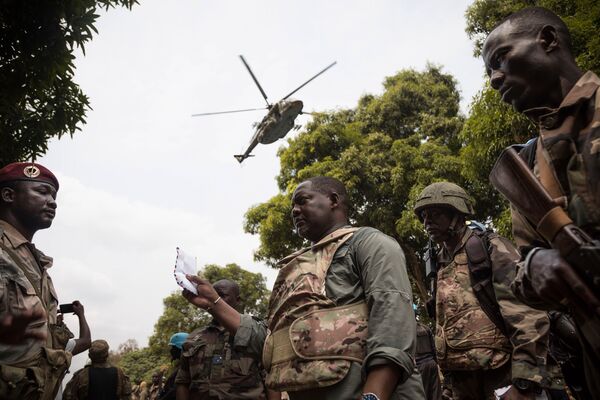 CAR Prime Minister Firmin Ngrébada (centre) talks to troops as a Russian Mi-8AMTSh helicopter flies overhead on the road between Boali and Bangui on 10 January. (Florent Vergnes/AFP via Getty Images)

The role of the Russian instructors is officially limited to training the Central African Armed Forces (FACA), transporting them to areas of operations, advising them, providing logistical support, and medical evacuation.

In a report released on 30 June, the panel of experts said the Russians “played a prominent role” in the successful counter-offensive against the rebel alliance that attempted to overthrow the government in December 2020.

It received testimony from many sources who “noted the active participation of Russian instructors in combat operations on the ground, many observing that the Russians often led rather than followed FACA as they advanced”. FACA personnel, including officers up to the rank of colonel, said Russians were operating independently of their own forces.

The co-ordinator of the Russian instructors in the CAR told the panel that their number had never exceeded 550, all of whom are Russian nationals recruited directly by the Russian Ministry of Defence, primarily from a veterans' organisation called the Officers Union for International Security.

However, the panel received estimates for the number of Russians from multiple sources that ranged from 800 to 2,100.

Russian personnel are taking an active part in combat operations in the Central African Republic (CA...