Russian strategic bombers visited South Africa for the first time on 23 October in an exercise designed to boost bi-lateral ties between the two countries while also demonstrating the long-range capabilities of the Russian Aerospace Forces. 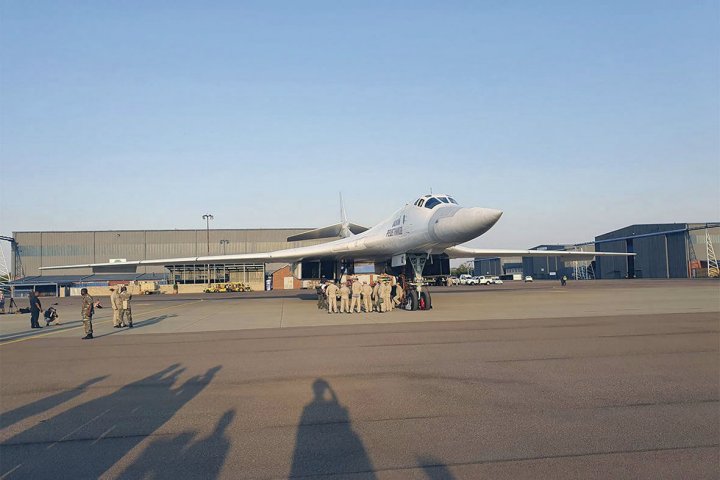 One of the two Tu-160 'Blackjack' bombers that, along with a support package of other aircraft, arrived in South Africa for the first time on 23 October. (Ministry of Defence of the Russian Federation)

The event, which coincided with the Russia-Africa Economic Forum being held at Sochi in Russia, saw two Tupolev Tu-160 ‘Blackjack’ bombers accompanied by a support package of a single Antonov An-124 ‘Condor’ airlifter and Ilyushin Il-64 ‘Classic’ airliner make the 11,000 km journey from their home base in Russia to the South African Air Force (SAAF) base of Waterkloof on the outskirts of Pretoria.

As noted by the Ministry of Defence (MoD) of the Russian Federation, the more than 13-hour flight was supported by aerial refuelling tankers, although these aircraft did not appear to land at Waterkloof AFB. In South African airspace, the Russian formation was escorted by SAAF Saab Gripen and BAE Systems Hawk jets.

“The purpose of the visit is to develop bilateral military co-operation and to develop issues of co-operation between the Russian Air Force and the South African Air Force,” the Russian MoD said, adding, “The implementation of the event will contribute to improving military training of the two countries. Comprehensive friendly relations between Russia and South Africa are built in a spirit of strategic partnership and mutual understanding.”

Russian strategic bombers visited South Africa for the first time on 23 October in an exercise desig...