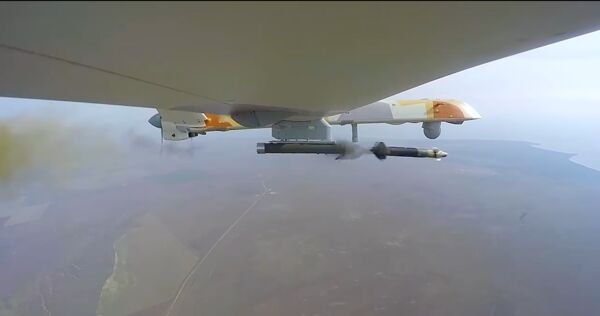 Russia has tested its Orion UCAV in an air-to-air engagement against another UAV. This screenshot from video footage of the test shows the launch of what appears to be a Kornet variant during the test. (Russian MoD)

Russia has tested an Orion unmanned combat aerial vehicle (UCAV) in an air-to-air engagement against a rotary wing unmanned aerial vehicle (UAV) during tests in Crimea, the Russian Ministry of Defence (MoD) reported on 19 December.

The Orion was shown taking off with a missile tube under each wing and tracking the rotary wing target before engaging it with a missile that appears to be a variant of the 9M113 Kornet anti-tank guided missile family. The engagement reportedly took place at a range of 4 km.

The missile used may be a development of the Kornet-D that was referred to as X-BPLA by an industry source cited in an 18 December Sputnik article. It was designed for use on the Ka-52 attack helicopter as well as the Forpost and Orion UAVs, the source said.

Russia has tested an Orion unmanned combat aerial vehicle (UCAV) in an air-to-air engagement against...